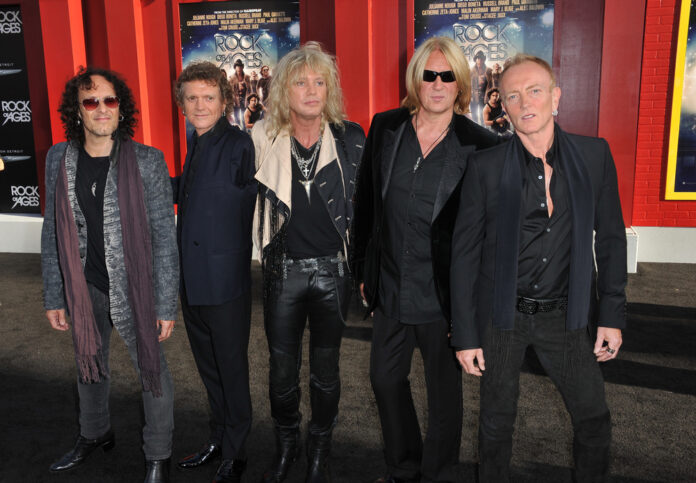 Def Leppard’s Rick Allen has said that the band will present new music in the “not too distant future”.

“There’s always new music on the go”, Allen said. “And I’m happy to announce that in the not-too-distant future we’ll be able to present that”.

“One of the nice things about technology”

Allen put this great progress made on new Def Leppard music down to technology which has allowed the band to communicate with each other across the world and still put new material together.

“I think that’s one of the nice things about technology these days is that we can be all over the planet and still sharing ideas or coming up with new songs”, he said.

Along with Allen, Def Leppard singer Joe Elliott said that he and his bandmates had been trading ideas on a new album. He did reveal that there is “a lot of work to be done”.

“But we have not let the year go to waste”, he said.

Elliott also spoke about the fact that Def Leppard have not released a new album since 2015.

“The industry being what it is, we’re all aware of the fact that there’s an element of the media that can’t let go of the fact that records aren’t that important anymore”, he said. “And I know that’s a sad thing to say, but it’s a fact of life”.

He continued, “Touring is massively important — way more than it was when you went out promoting records when they were important. Especially for legacy bands or whatever you wanna call ’em. Listen, I went to see The Rolling Stones in 1989 in case one of them died. That’s 1989. They haven’t had a death since the 1960s”.

“When we finished that (2015) album, we never really thought about making another record until we just felt the timing was right”, Elliot said.

“And we always just fall into place. We’re constantly writing songs, so when it comes to piecing songs together, it’s not like they’re all absolutely brand spanking new, just written,  hot-off-the-press stuff”.

“Some of them are ideas that have been percolating for a year or two with a piece missing. And you wait and you wait and you wait, and then you have this epiphany, or one of the other guys goes, ‘Why didn’t you ask? I’ve got a bit that would fit in there perfect.’ So there’s been a lot of that going on. But that’s a constant; that’s nothing to do with coronavirus. We’ve been doing it since the ‘Def Leppard album came out, and we will continue to do it, whether we release an album or not. We’ve got songs in our heads”.