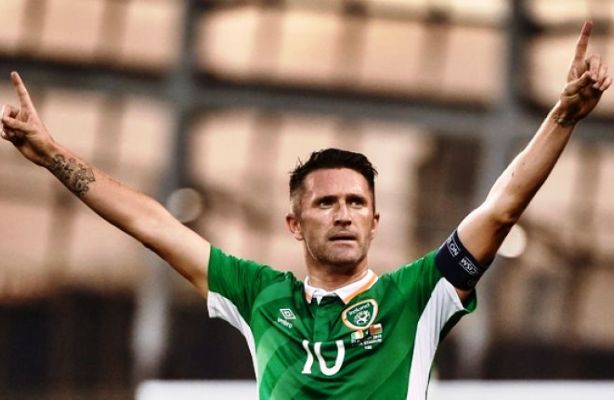 Robbie Keane has announced his retirement from playing. The news follows the Dubliner’s appointment as the new Republic of Ireland assistant coach.

In a statement, he said he is “honoured and excited” to now be working alongside Mick McCarthy and the international team. The 38-year-old who began his professional career with Wolverhampton Wanderers in 1997, scoring twice on his debut.

He went on to play for the likes of Leeds United, Tottenham Hotspur, Liverpool, LA Galaxy and Atlético de Kolkata in India.The Dubliner made 146 international appearances for the Republic of Ireland – scoring 68 goals.

Here’s what he had to say:

Today, after 23 wonderful years, I am formally announcing my retirement as a professional footballer.

From Crumlin United around the world to the likes of Milan, London and Los Angeles, I could never have imagined the path my football life would take. It has exceeded all the hopes I had as a football-mad boy growing up in Dublin.

Leaving home at 15 years of age to pursue my professional career in England seems a lifetime ago now. I was a street footballer full of hope armed with huge ambitions and a determination to succeed. All I needed was that one chance.

I would like to pay a special thanks to Wolverhampton Wanderers for believing in me and giving me that chance when I made my professional debut in 1997, at the age of 17, against Norwich City. I will never forget that day, and was fortunate enough to score both goals in a 2-0 win. That feeling of euphoria drove me to the heights I reached during my career.

From Wolves, my professional career followed a path that took me far and wide, giving my family and I the opportunity to meet and work with so many wonderful people and experience several different countries and cultures.

I have always wanted to test myself and strive to be the best that I could be, so I embraced new challenges be it at Coventry City, Inter Milan, Leeds United and then possibly the most successful period of my club football career with Tottenham Hotspur. I had the great privilege to represent and captain Tottenham over 238 games. I had many wonderful times there and I will look back on my days at White Hart Lane with great fondness. The club will always hold a special place in my heart.

There were shorter times spent at Glasgow Celtic and Liverpool, two truly iconic global institutions, and then West Ham United, before Los Angeles became our home away from home. We spent five hugely successful and rewarding years, both on and off the field, with LA Galaxy.

After a spell with Aston Villa, my playing career concluded with an exciting few months with ATK, a club which also gave me my first experience of management.

Playing and captaining my country has been the highlight of my career. I enjoyed every moment of the most incredible journey with the Ireland team over an 18-year period and as I have said many times before, words cannot express how proud I am to be Irish. I hope I have made the fans proud wearing the green jersey and armband.

It was always an honour to play for my country. Representing my country in the 2002 FIFA World Cup and two UEFA European Championships Finals are particular memories I will cherish forever.

I would also like to acknowledge the fans. It was always important for me to have a good connection with the fans of the teams I have played with – and their full support was vital to me, on both good and bad days, and was always greatly appreciated.

I would like to thank the teammates I have played with and the managers and staff I have worked with. I was honoured to work and learn from you all – you were invaluable to my development as a player.

I would also like to thank my agent and advisers Struan Marshall, Ciarán Medlar and Damien O’Donohoe for all your support to me and my family.

Thanks to my parents Anne and my late father Robbie Snr, my brother Graham and sisters Natasha and Amy for everything they have given me and who have always helped me throughout with their absolute support and advice. You can never know how much your love and support has meant.

Finally, I want to thank my wife Claudine and my two sons Robert and Hudson – who are always there for me – for all their love, support and encouragement. I am so incredibly grateful for all you have done for me since you came into my life, for the many sacrifices you have made so that I could pursue my career. Your love and inspiration has motivated me every day across each new adventure we have embraced around the world, and I have no doubt there will be many more to come.

I take great pride in having scored 325 goals in 737 club appearances and 68 goals in 146 international appearances for the Republic of Ireland. But for me, it was about making my family proud and the friendships that this wonderful game has given me. It is difficult to summarise a 23-year career but I feel incredibly lucky to have had the opportunity to do something I love every day.

With the closing of one chapter comes an exciting new adventure. I am incredibly proud, honoured and excited to now be working alongside Mick McCarthy, Terry Connor and the Irish international team over the next number of years. This is a role I have massive passion, energy and enthusiasm for and I hope to use my experiences to contribute towards a bright future in Irish football.

To all those who believed in me, supported me and picked me up when I needed a hand, you can never know how much that has all meant. It was an honour to represent you.

Thank you from the bottom of my heart.