Home Music News Rock And Roll’s Hall Of Fame Ceremony Sees Some Of The Greats... 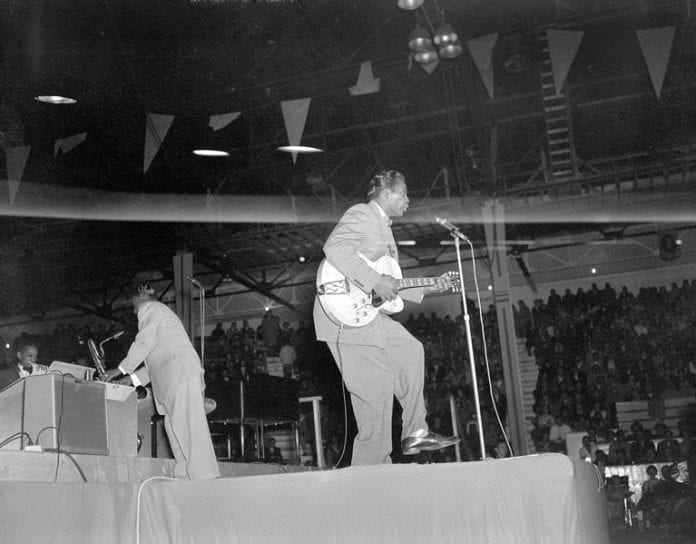 The iconic Rock and Roll Hall of Fame ceremony took place recently and it saw some of the greats on stage performing their hits. The show was packed with performances and tributes.

Considering Chuck Berry is one of the most important figures in rock history, it makes sense that the first Rock Hall ceremony following his death would open with an homage to the rock n’ roll architect.

Mr. Berry, who died just last month, was the first inductee to the Rock Hall, in 1986. Often considered one of the most of important figures in Rock and Roll, this belief was reiterated by Jann Wenner, the founder of Rolling Stone and one of the creators of the hall,  when he said  that “No one in this room would be here tonight if not for this man.”

A video montage played out featuring testimonials from Bruce Springsteen, Paul McCartney and Keith Richards along with Berry discussing his music.

ELO, who were also finally getting inducted into the Hall, were tasked with the job of honouring Berry and played his classic “Roll Over Beethoven.” As they played, still images of Mr. Berry were displayed on the huge stage backdrop.

Pearl Jam were one of the most hotly anticipated honourees for the awards, and they did not disappoint. After Neil Young had to pull out due to illness, David Letterman took the stage to introduce the band. The band, which has had numerous line up changes over the years, made sure to honour all its members past and present and even took the stage with original Ten drummer Dave Krusen (who hasn’t played with the band in 25 years!). The band went on to perform their hit “Better Man”.

In one of the more controversial moves by the Hall of Fame folks, one the inductees of the night wasn’t exactly from the Rock and Roll genre, but rather was deceased rapper Tupac. While many were unhappy about this induction (we’re looking at you Gene Simmons), the show gave a wonderful ode to a man who helped revolutionise the music industry.

Tupac’s collaborator and friend, Snoop Dogg took the stage to do the inducting honours and recalled humorous stories about the pair on vacationing together and parasailing. “Does anybody know what parasailing is?” the rapper asked the crowd. “’Cause we damn sure didn’t.”
Following his induction of Tupac, there was a musical performance by Alicia Keys along with YG, T.I and Treach.

For those hoping that the ceremony would see Steve Perry re-joining forces with the rest of his former Journey bandmates, they were left disappointed, as the musicial collaboration did not happen. However, they were treated to Steve Perry thanking his fans in his speech “You put us here, we would not be here had it not been for you…Your tireless love and consistent devotion, you never have stopped. But from my heart I must tell you — I’ve been gone a long time, but you’ve always been in my heart.”

Pearl Jam returned to the stage to close out the ceremony with a tribute to Neil Young’s “Rockin’ the Free World” alongside members of Rush, Trevor Rabin of Journey and Yes, and Dhani Harrison.

Are Foo Fighters Going To Announce A UK Tour?