Home Classic Albums You Can Listen To Rod Stewart’s ‘Every Picture Tells A Story’ From... 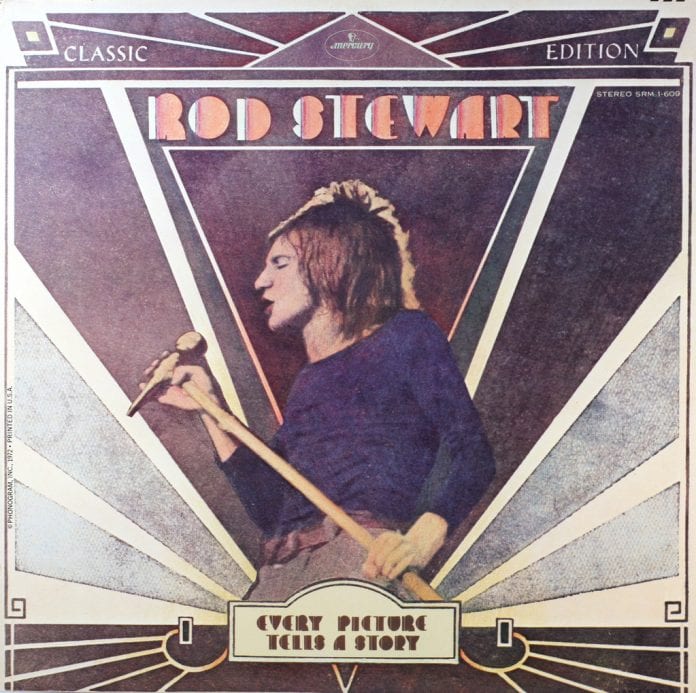 Every Picture Tells a Story is the third album by Rod Stewart, released in the middle of 1971. It went to number one on both the UK and U.S. charts and finished third in the Pazz & Jop critics’ poll for best album of 1971. It has been an enduring critical success, including a number 172 ranking on Rolling Stone magazine’s 2003 list of the 500 greatest albums of all time and inclusion in both 1001 Albums You Must Hear Before You Die (2005) and 1,000 Recordings to Hear Before You Die (2008).

The album is a mixture of rock, country, blues, soul, and folk, and includes his breakthrough hit, “Maggie May”, co-written by classical guitarist Martin Quittenton, as well as “Reason to Believe”, a song from Tim Hardin’s debut album of 1966. “Reason” had initially been the A-side of the single and “Maggie May” the B-side, until general reaction resulted in their reversal.

The album also included a version of Arthur Crudup’s “That’s All Right (Mama)” (the first single for Elvis Presley) and a cover of the Bob Dylan song “Tomorrow Is a Long Time,” an outtake from Dylan’s 1963 album The Freewheelin’ Bob Dylan (it would see release on 1971’s, Bob Dylan’s Greatest Hits Vol. II).

All five members of the Faces (with whom Stewart at that time was lead vocalist) appeared on the album, with guitarist/bassist Ronnie Wood and keyboardist Ian McLagan on Hammond B3 organ being most prominent. Due to contractual restrictions, the personnel listings were somewhat vague, and it was unclear that the full Faces line-up recorded the version of the Motown hit “(I Know) I’m Losing You”. Other contributors included Ray Jackson on mandolin (though Stewart forgot his name and merely mentioned “the mandolin player in Lindisfarne” on the sleeve). Micky Waller on drums. Maggie Bell performed backing vocals (mentioned on the sleeve as “vocal abrasives”) on the title track, and Madeline Bell sang backup on the next track, “Seems Like A Long Time”. Pete Sears played all the piano on the album except for one track, “I’m Losing You” which featured Ian McLagan on piano, along with the Faces as a band.

It reached the number-one position in both the UK (for six weeks) and the US (four weeks) at the same time that “Maggie May” was topping the singles charts in both territories, making Stewart the first artist to achieve such a feat. It has often been voted among the best British albums of all time.

In 1992, the album was awarded the number-one spot in Jimmy Guterman’s book The Best Rock ‘N’ Roll Records of All Time: A Fan’s Guide to the Stuff You Love.

Every Picture Tells a Story was ranked 99th in a 2005 survey held by British television’s Channel 4 to determine the 100 greatest albums of all time.

In 2009 the song “Every Picture Tells a Story” was used for the soundtrack of Rockstar Games’ “Grand Theft Auto IV: The Lost and Damned”. This album sold 4 million copies worldwide.

“Amazing Grace” is not listed on the label on most editions, and on some CDs is part of “That’s All Right”. It is actually written by John Newton.