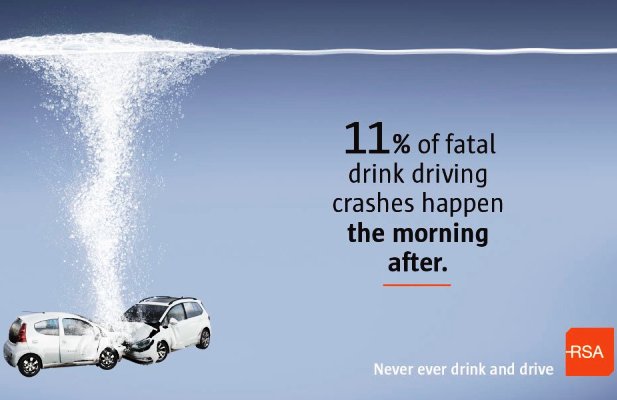 Gardaí and the Road Safety Authority are highlighting the dangers of driving the morning after consuming alcohol. 11% of fatal collisions in which a driver had consumed alcohol, occurred between the hours of 7am and 11am.

An Garda Síochána and The Road Safety Authority have today appealed to all road users to act responsibly and safely on the roads throughout Christmas and New Year.

Drivers have been especially warned of the dangers of driving the morning after a night of drinking when their driving could still be impaired by alcohol.

The highest number of DUI arrests, at 104, occurred on a Sunday morning representing 26% of all arrests between 7am and 11am, followed closely by Monday, at 90 arrests, representing 22% of all morning after arrests.

“The focus of our appeal this year is to warn the public about the dangers of driving the morning after consuming alcohol. We know that alcohol remains a significant contributory factor in fatal crashes and is responsible for far too many deaths and injuries on Irish roads. I appeal to all those socialising over the Christmas and New Year period to do so responsibly and never, ever, drink and drive, including the morning after. It’s simply not worth the risk now that new penalties have been introduced which mean drivers detected with a blood alcohol concentration between 50mg and 80mg face losing their licence for three months. So if you have done the right thing the night before, don’t forget to do the right thing and make alternative arrangements to travel the morning after.”

“Drink driving is a behaviour that must no longer be tolerated in our society and for that to happen people need to know all the facts. Drink driving at any time of the day or day of the week is drink driving, which is why you must take extra care the following morning if you have been drinking the night before. If you have been on a drinking session the night before and got to bed very late you could still have alcohol in your system. As we can see from our analysis of Garda forensic investigation files, the morning after is a risk zone for alcohol related fatal crashes as 11% of fatal collisions in which a driver had consumed alcohol, occurred between the hours of 7am and 11am.”

“An Garda Síochána will be launching its six week Christmas and New year road safety campaign beginning this weekend. This will include a focus on Mandatory Intoxicant Testing checkpoints around the country to deter people from driving under the influence of alcohol or drugs or a combination of both. With just over one in ten alcohol related fatal collisions happening the morning after An Garda Síochána will also be focusing operations to address this issue. Indeed, 6% of all DUI arrests to date this year have occurred in this period. Please don’t risk it – keep your loved ones and our roads safe this Christmas and New Year.”

136 people have died on Ireland’s roads to date in 2018 according to provisional figures from An Garda Síochána. There have been three fewer deaths this year compared to the same date last+ year.