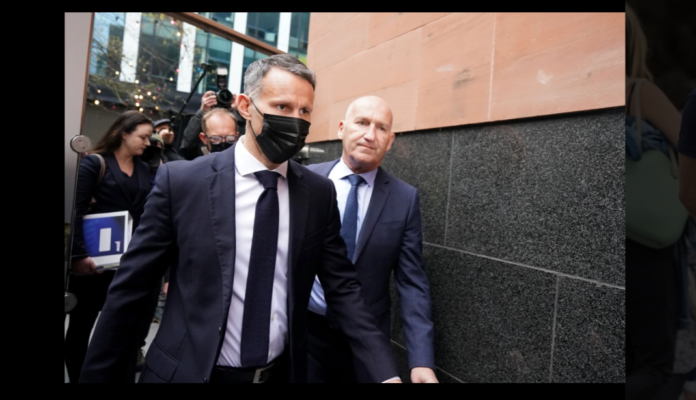 Arrivng at Manchester Magistrates Court yesterday morning, Giggs only spoke to confirm his name, address and his not-guilty plea in front of a socially distant courtroom.

Former Manchester United star Giggs, is accused of headbutting and causing actual bodily harm to his ex girlfriend at his home in Worsley, Greater Manchester. He was also charged with coercively controlling her for a three year period and for common assault on her sister.

Ryan Giggs first met Ms Grenville while she was working on PR for his hotel football business.

She was appointed to head of PR and communications for GG Hospitality. This hospitality firm had been co-owned by Ryan Giggs and his former Manchester United team mate Gary Neville.

Kate was also involved in the launch of the Stock Exchange Hotel in Manchester city centre. She then took up a PR consultancy role with a former employer last July.

It was claimed that throughout their relationship between 2017-2020, Giggs used “harassment, humiliation, degradation and abuse” against Kate Grenville.

On Novemeber 1, police were called to Giggs’ £1.7 million home following reports of a disturbance. He was later arrested and bailed pending further enquiries.

Prosecuting Andrea Griffiths said that the accused, “isolated her from her friends and colleagues”. She also added that he “subjected her to degrading treatment”.

Mrs Griffiths also said that this alleged treatment “spanned a very long period of time”. She said that it resulted in Ryan Giggs attacking her following a night out.

Coercive control became a criminal offence in 2015. It carries the maximum prison sentence of five years if found guilty.

According to law, it is defined as “an act or a pattern of acts of assault, threats, humiliation and intimidation or other abuse that is used to harm, punish, or frighten a victim”.

Ryan Giggs will next appear at Manchester Crown Court on May 26.

Ryan Giggs had been manager of the Wales International Soccer side, but since his arrest last year, they have been managed by caretaker boss Robert Page. The FAW (Welsh Football Association) recently confirmed that Page will take charge of the side for the re-scheduled Euro 2020 Tournament this Summer.