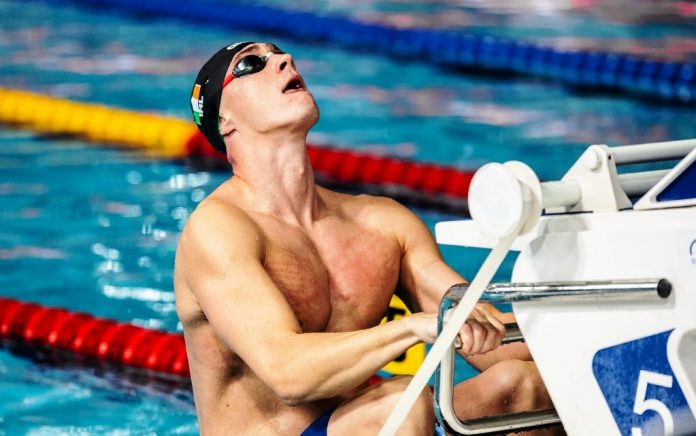 Shane Ryan has made history claiming Ireland’s first ever World Championship swimming medal today as he took Bronze in the 50m Backstroke Final at the World Short Course Swimming Championships in Hangzhou, China.

Ryan has progressed through the rounds with three Irish Records, from 23.03 in the heats to 22.96 in last night’s semi-final and today a huge leap to 22.76 for the Bronze medal.

The medal-winning time moves the 24-year-old into the top 10 of all-time in the event, ranked at number 9.

‘I’m really really happy with how tonight went, I know with each race I wanted to get a little bit faster and just try to get my hand on the wall, tonight I’m happy I got my hand there, got a bronze medal and I’m glad that Ireland were on that podium with the flag raised.

It’s a great honour, it really is, every stroke I was racing I was thinking, I’ve got to get my hand to the wall, not only for me but for Ireland, my coaches, my team mates, it’s not just for me it’s for everyone else, Irish swimming is in the spot light, the future is really looking good for all of us.’

Russia’s Evengy Rylov took the gold medal in the event in 22.58, USA’s Ryan Murphy claimed silver in 22.63 and the battle for third left just three hundredths of a second between third and fifth, Ryan claiming the medal ahead of Russia’s Kliment Kolesnikov (22.77) and Brazil’s Guilherme Guido (22.79).

Ryan returns to the pool tomorrow for the 100m Freestyle heats and will also be joined by Conor Ferguson, Darragh Greene and Brendan Hyland for the Men’s 4x50m Medley Relay. Greene also competes in the 50m Breaststroke heats. With all four swimmers in record breaking form this week, Irish records in all three events will certainly be under threat.

Swimming in her first senior international event Coyne has impressed with best times in both the 50m and 100m Breaststroke so far.