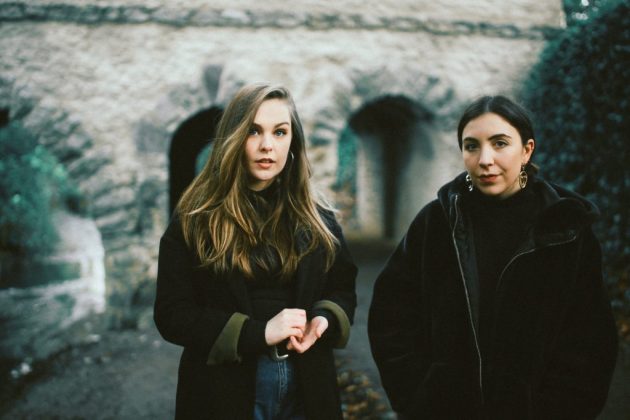 Atmosfolk, that’s how Morgan MacIntyre and Gemma Doherty aka Saint Sister describe themselves. Saint Sister are set to play The Olympia Theatre on the 11th of October. Tickets go on sale this Friday at 9am available from Ticketmaster.

Drawing from early Celtic harp traditions, 60s folk and electronic pop, Saint Sister, formed in November 2014. The duo infuse a mix of soulful vocal harmonies, dreamy synth and electro-acoustic harp. A couple of their songs are available to listen to below.

A month after their formation they were asked to perform on TG4 and shortly after opened Whelan’s for Arcade Fire’s Will Butler. Their debut EP ‘Madrid’, recorded with Alex Ryan, bassist with Hozier, was released in November 2015 and within its first year reached over 1 million streams on Spotify. The track also received favourable support from UK and Irish radio.

2016’s ‘Tin Man’ came out as part of Communion’s Singles Club and received continued support from national radio, both at home and abroad. The track was nominated for song of the year by the Choice Music Prize and the band named “Best Irish Band” in 2016 by the readers of The Irish Times.

Since their formation, the band have toured extensively throughout Europe. They made their US debut in March 2016 with multiple showcases at SXSW and have had notable appearances at numerous festivals including BBC Introducing at Glastonbury, Latitude, Electric Picnic, Longitude, The Great Escape, Reeperbahn Festivaland Eurosonic.

2018 has seen the band travel to Sweden for a Stockholm headline as well as perform at Where’s the Music festival. They performed at The National Concert Hall, Dublin and The Barbican as part of the Imagining Ireland series.

The band embarked on a tour of the USA in March with a sold out show in Brooklyn, NYC as well as shows inRockwood Music Hall and a second appearance at SXSW This summer the band look forward to playing the main stage at Body and Soul ahead of their debut tour of Australia in November.

The @othervoiceslive @epfestival special airs tonight on RTE2. We’ll be playing Causing Trouble, with a load of other friends and legends on the show too! Tune in at 23:40.