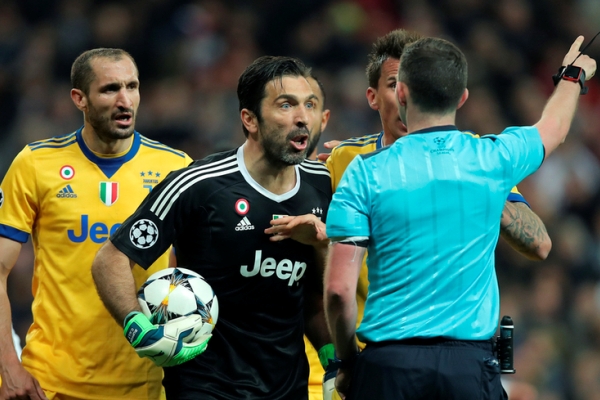 After an astonishing couple of nights of European club football in which joy and agony proved uneasy bedfellows in Italian football as Roma stunned Barcelona amid rapturous scenes to reach the semi-finals, there was equal dollops of rage, fury and heartbreak for Serie A’s six in row champions Juventus after an injury penalty decision led to a gut wrenching defeat.

The Turin giants had defied the – 300 to 1 ON –  odds afforded to unbackable favourites Real Madrid, clawing back a seemingly unassailable 3-0 deficit to draw 3-3 with two goals from big Croat striker Mario Mandzukic and an opportunist effort from Blaise Matuidi to level the tie.

In what was likely to be his final Champions League game before retiring, he was sent off in a dramatic 4-3 quarter-final aggregate defeat to Real Madrid. Juve had come from 3-0 down in the tie to equalise – before Oliver awarded a penalty to Real – scored by Cristiano Ronaldo in the 97th minute. Buffon received a red card for his protests.

Italian sports daily ‘Tuttosport’ report that ”Michael Oliver, the English referee is the most talked-about man of the moment after the generous penalty whistled at Real Madrid in the recovery. The ref who’s only in his second year in the Champions League and many fans have only begun to dissect all the curiosities about his life.’

‘Among these there is certainly the marriage with Lucy May that since 2015 for everyone has become Lucy Oliver and she is also a referee. Some Juventus fans, angry after the match, have pulled out some tweets of 2016 in which the couple showed his love for the city of Madrid and the Santiago Bernabeu. Fans have already begun to storm Lady Oliver’s profile with unpleasant comments.”

Meanwhile La Gazzetta Della Sport went in harder ….”Juve’s Buffon explosion. In a moment of maximum tension, and in front of the whole world in the Champions League, a step away from the semi-finals of the most important continental tournament, English ref Oliver, guilty of having assigned a penalty in the minute 93 of the return of the quarter-finals, at the Bernabeu and a step therefore from the extra time of the match.

“The referee has a rubbish bag in place of his heart, he is unworthy of refereeing on this levels, next time he should go to the stands to drink and eat fries”. While the usual web split between defenders and guilty parties, provided a barrage of comments on social media between irony, criticism and solidarity.

”If there is a savage and sadistic way to be eliminated, then this is it’, wrote Fabrizio Bocca in La Repubblica. ‘Better, much better, to go to the Bernabéu, lose the match and amen. See you again next year. Like this, no, like this everything stays open and everything feels unfinished, like a door slammed in your face.’

”To concede a debatable penalty that decides access to the semi-final of the Champions League, on a refereeing level, qualifies a mistake,’ wrote Francesco Ceniti in Gazzetta dello Sport. ‘We need to start with this premise before analysing the incident which rightly infuriated Juve. Because every referee knows well that there are moments in which your whistle has a different weight and so you only punish obvious fouls.