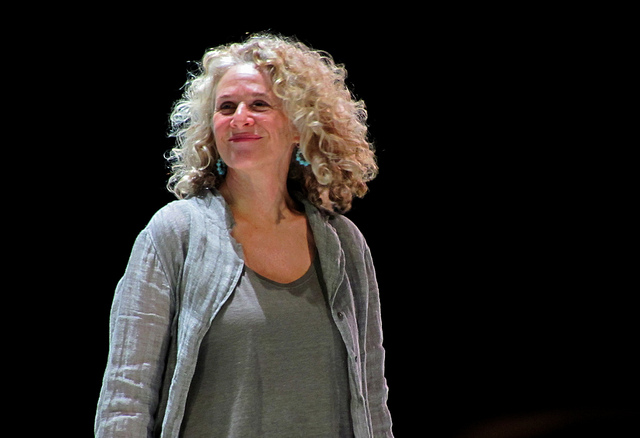 Carole King made a surprise appearance during the fifth anniversary performance of the Broadway musical based on her life, ‘Beautiful’, now playing at Manhattan’s Steven Sondheim Theatre.

During the second to last number of the Tony and Grammy Award-winning show, instead of actress Chilina Kennedy performing the musical’s title song recreating King’s 1971 Carnegie Hall concert, King herself surprised the crowd by performing it herself.

She stayed on with the cast to sing the encore of “I Feel The Earth Move” and afterwards addressed the crowd, saying, “What a night! It was amazing to be a part of this.This musical has been such a magical experience. To be here and celebrate our fifth anniversary with so much joy and love is amazing.”

“Everyone connected with this show will agree that the people we have to thank the most are you, the audiences; please give yourselves a hand. It’s thanks to you, you who have come once … twice, three times. I hear from people who’ve brought friends, family and shared the joy and shared the love, and it’s amazing. So if you keep doing that, you never know when I might show up again.”

‘Beautiful’ opened on Broadway on January 13th, 2014; the musical went on to win a Tony Award (and earn seven nominations), a Grammy and, for its touring production, an Olivier Award in the U.K.