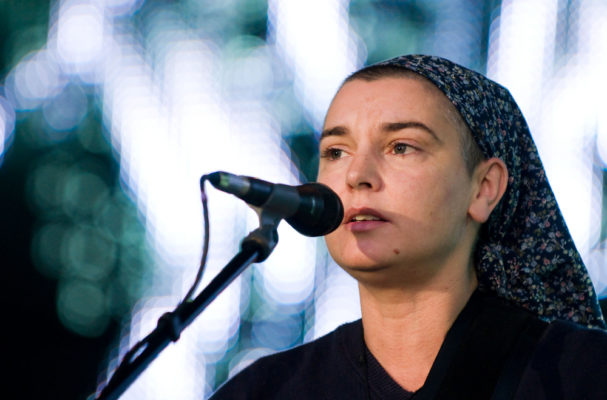 The artist formerly known as Sinead O’Connor has requested that Pope Francis grant the singer with an official excommunication certificate. O’Connor has renamed as Magda Davitt and has asked the pontiff if he’ll meet with her when he visits Ireland next week. It’s the singer’s wish to be officially kicked out of the Catholic Church.

Our outspoken lady of Ireland famously ripped up a photo of Pope John Paul II back in 1992. She was appearing on the American sketch comedy show Saturday Night Live. The singer was excommunicated by Pope Benedict XVI in 2013 but maintains she has no proof of it. That was after she was ordained a priest by the radical Tridentine bishop, Michael Cox, in 1999.

In an open letter to the Pope, Davitt writes, “I have several times requested from the Vatican a certificate which I could proudly display to my grandchildren to prove that Ratzinger and Pope John Paul II excommunicated me for being ordained. Can you please arrange it be brought with you on the plane and perhaps presented to me at Croke Park?” Davitt is convinced the official certificate will help her get studio time with Rappers such as Kanye West.

“All musicians covet the Parental Advisory Sticker – it’s the coolest thing in the recording industry. But an excommunication certificate would make 2Pac look like Daniel O’ Donnell. Maybe if they won’t give me a certificate they’ll at least brand me with a huge red letter. If I had a cert maybe Kanye West would make records with me… Rappers will hero-worship me if I wave that s**t about in the studio.”

She concludes her letter to Pope Francis by insisting she quite likes the latest pontiff, adding, “I actually like you. You’re funny. Very funny. You can make your pope robes vanish and be ‘just a man’ with your jokes.” As to whether Davitt is going to attend either of the Pope’s public ceremonies, she simply told The Irish Daily Star, “I’m not going.”

Meanwhile, The singer has shared her first new song in four years. It’s titled “Milestones.” The song, which Davitt explains is a type of “first demo for fans,” is a collaboration with producer David Holmes. Holmes recently produced Noel Gallagher’s critically acclaimed Who Built The Moon?.