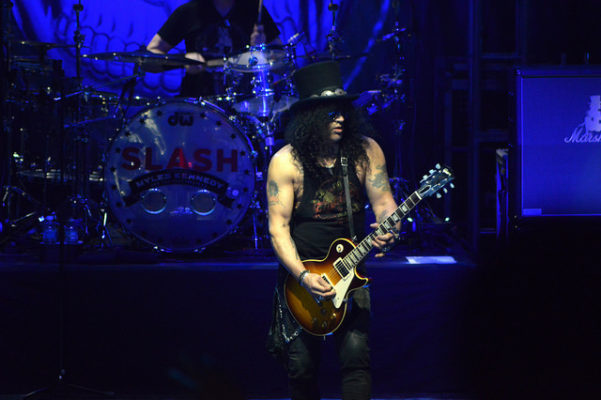 According to a report in TMZ the Guns N’ Roses guitarist maintains that a man attempted to make his way into his home by trying to convince his girlfriend he was a friend. The rocker is so concerned that he’s applied for a restraining order.

Slash said when the man was refused entry he rang the doorbell several times and got so mad he violently bashed the security camera. Then, two weeks later, according to Slash, the guy showed up at an invitation-only party. Again he claimed to be Slash’s friend. When he was turned away he got on his motorcycle in the parking lot revving his engine.

It remains unclear why this man wanted to get at Slash so badly, but it was enough to scare the guitarist to run to court. The judge has granted a temporary restraining order.

Meanwhile, in Guns N’ Roses tour news, The Manic Street Preachers will be joining the band on three dates of their European tour.

The Manics have always been fans of the band saying that 1987’s ‘Appetite For Destruction’ was ‘the first time we realised rock wasn’t dead’. They will play shows in Berlin, Odense and Gelsenkirchen on June 3rd, 6th and 12th. Tickets are on sale now.

The Manics will release their 13th album ‘Resistance is Futile’. It follows 2014’s ‘Futurology’ and the new LP comes out on April 13.