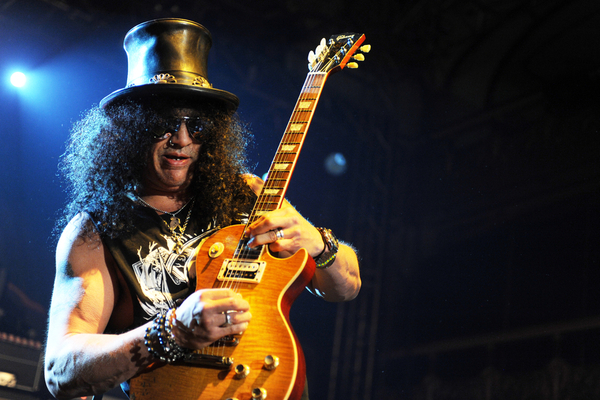 Slash has recently spoke on giving up smoking and gave some advice to the millions of smokers who are trying to quit. Speaking in an interview with Germany’s Antenne Sylt, the guitarist said, “quitting smoking is the hardest thing I’ve ever quit.”

“I can think of a lot of stuff that was hard to quit and smoking was the hardest. You just have to make that decision and then stick to it,” Slash admits. “And then, from that point on, I used the patch and then I used Nicorette and then I was doing snus, and then regular gum. And I’m still chewing regular gum. And it’s been [more than] 12 years. So, you just have to make the decision and then you have to do it. But it’s not easy.”

As a full-time smoker, the rocker would have needed some strong motivation to help him give up and found that in Cher. In a 2018 interview with WTF With Marc Maron, Slash recalls watching Cher perform in concert helped him quit smoking more than a decade ago. “When I did it, I had pneumonia, and pneumonia is what helped me quit smoking.

“That, and I saw Cher the night before, and that’s when I caught the pneumonia. So, Cher helped me quit smoking. Anyway, I couldn’t smoke. I tried — I couldn’t breathe — so I had two weeks on my back. So, I quit, and then I used the patch to sort of get the edge off. Then I started doing the snus [smokeless tobacco] thing, and I was doing that for years. My significant other talked me out of doing it, and so I started doing the [nicotine] gum. And I sleep with the gum.”

Slash recalls losing his mother to cancer, following years of claiming she would give up, although “while she was in the hospital, I would literally sit with her, go outside, and smoke a cigarette, come back and sit with her. And then the Cher thing happened, and that’s when I said, ‘You know what?’”

The guitarist continues to say he had been dragged to Cher’s concert by his ex-wife and her “buddies”, although spending most of the night outside smoking. “I had to leave for every song and go outside and smoke. And I think I’d worn myself down from smoking so much, and Cher just took me over the top. Every time she revisited one of those periods [during the concert]

“She had a closet on stage, and she’d go in the closet, and she’d come out and she’d be the Indian. Every single thing that she’s been over her career… When she started with the Sonny & Cher thing, it just killed me — I couldn’t take it. So, I would smoke… I just didn’t have any fond memories of that show or any of the other stuff.”

Opening up on getting clean, Slash claims staying smoke-free is “tough”, as he explained, “You’ve got these triggers all the time. They only last for maybe two seconds or so, but they’re really, really potent. And you can just get it watching somebody smoke on TV. I saw somebody smoking at a bus stop, and I said, ‘Ohhh…’ It happens at least once a day every day.”

The 60-a-day smoker describes himself as a “compulsive smoker. I chainsmoked. And I couldn’t handle — this is not why I quit smoking — but I couldn’t handle not being able to smoke wherever I wanted. The first time I quit smoking was because me and my wife just had a baby and she claimed the baby smelled like an ashtray,” he said. “So, I thought, ‘Well, I’ll give it a shot.’ So, I quit for a year and then I started again.”