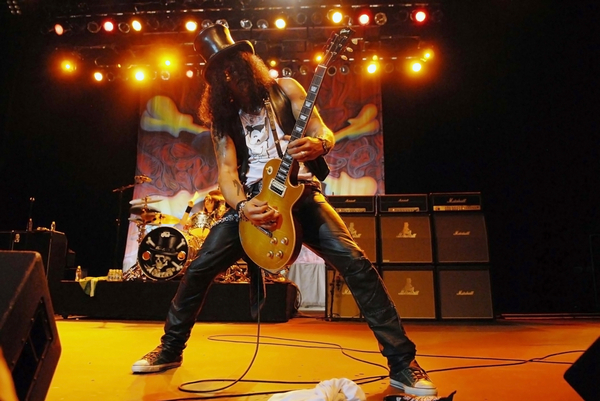 A new single from Slash, along with Myles Kennedy & The Conspirators, is set for release this Friday, October 22nd.

Titled The River is Rising, the single is taken from the upcoming album from Slash featuring Myles Kennedy & The Conspirators. The album’s title has yet to be revealed, and no release date has been announced yet.

The album will be Slash’s fourth with Myles Kennedy & The Conspirators, who consist of guitarist Frank Sidoris, bassist Todd Kerns and drummer Brent Fitz. The band first formed for 2012’s Apocalyptic Love, which they followed up with 2014’s World on Fire and 2018’s Living the Dream.

“This was the first time that we actually did all the guitars, bass and drums live at the same time, and kept all those tracks,” Slash said in a teaser clip for the single released on his official Twitter account. “And we also did the vocals live as well. So the record just sounds like the band playing the songs that we came in with, but it’s us playing in the moment. And that’s what we were going for.”

“This one’s pretty much a live record, from my standpoint,” said Myles Kennedy, who provides vocals on the track and upcoming album. “You’re just trying to kind of document where you are at that point in life, and do it in an authentic way.”

Speaking of the upcoming album, Slash described it as “probably the best one we’ve done so far.”

“I think the record itself is probably the best one we’ve done so far,” Slash said in a teaser clip released earlier this month. “We’re showing no signs of slowing down.”

Quizzed about the album’s release date, Kennedy said “I think the goal is just when the time’s appropriate, we’re going to put it out, hopefully next year – hopefully early next year.”

Slash fans will be looking forward to February, when Guns N’ Roses release their new EP Hard Skool. The four track EP will include recent singles Absurd and Hard Skool, along with live versions of Don’t Cry and You’re Crazy. A 7″ vinyl version will follow in June.

Conspirators guitarist Frank Sidoris was recently involved in a car crash alongside his wife Alexandra.

Writing on Instagram, Sidoris placed the blame for the crash on the driver of a pickup truck carrying “illegal weight on a single axle trailer without brake lights or turn signals.”

“The driver hit his brakes on a downhill causing the weight of the van and trailer to push the pickup directly in front of us, making him completely perpendicular to the left lane we were in giving us nowhere to go except the desert median,” he wrote. “We clipped the front of his pickup truck which sent us airborne over a drainage ditch, crashing head-on in to the other side.”

Sidoris escaped uninjured but Alexandra received fractures to her L1 vertebrae and right ring finger, which the guitarist described as “mendable through surgery and months of physical therapy.”

VICTORY For Nova & You As Ticketmaster Shuts Down Seatwave Under...