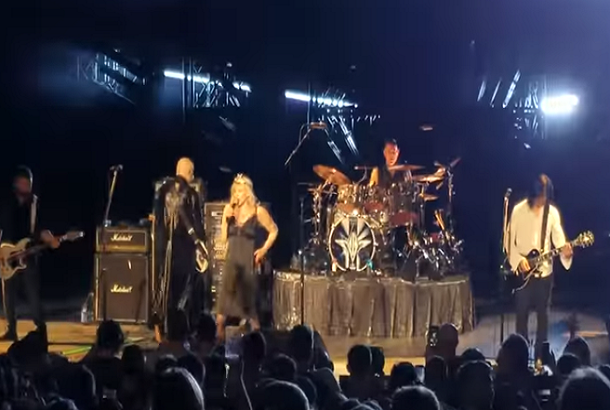 Courtney Love came out to perform Hole tracks ‘Celebrity Skin’ and ‘Malibu’ – songs which were co-written by Smashing Pumpkins frontman Corgan. She also helped out on a performance of Pumpkins’ song ‘Bullet With Butterfly Wings’. See a clip of her performances below.

They also treated fans to a special rendition of Gish track ‘Snail’ for the first time in 18 years. Fans were also privy to a rare performance of  Mellon Collie and the Infinite Sadness’ song ‘Bodies’. Deftone’s Chino Moreno guested as vocalist for the band on those tracks.

The Killers, Dave Keuning and Mark Stoermer joined the Pumpkins for ‘1979’ and ‘Cherub Rock’ while Sugar Ray’s Mark McGrath helped out on a cover of his band’s own classic track, ‘Fly’ as well as a cover of Judas Priest’s ‘Breaking the Law’.

Peter Hook guested on New Order’s ‘Age of Consent’, while AFI’s Davey Havok joined him and the band for a performance of ‘Transmission’. The band, with Hook, Havok, and Love, finished the show with a cover of Joy Division’s ‘Love Will Tear Us Apart’. You can see the full set list below.