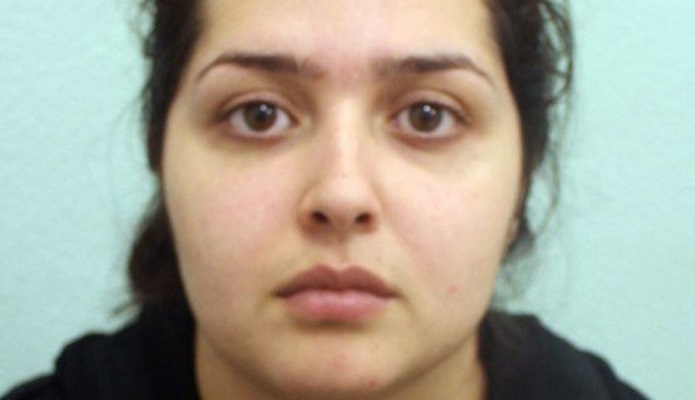 A “Snapchat queen” who shared a video of her boyfriend dying in a pool of blood in England has been jailed there for 14 years. Fatima Khan, 21, conspired with another lover to harm 18-year-old asylum seeker Khalid Safi, from Afghanistan. It’s reported she had grown tired of her boyfriend after two years together.

Jurors were told Mr Safi was repeatedly stabbed in the chest by Raza Khan in North Acton, west London, on the evening of December 1, 2016. Fatima Khan, 21, shot video footage of him as he lay dying in the street and then posted it on Snapchat with the caption: “This is what happens when you f*** with me.”

The Snapchat addict denied murder and the alternative of manslaughter saying she was ashamed of the video she had made. A jury at the Old Bailey found her guilty of manslaughter by a majority of 10-1. The court heard the defendant had past convictions for assault, shoplifting as well as fraud dating back to when she was aged 14 years old.

In charge of mitigation, Kerim Fuad QC claimed she had a “pathological obsession” with her mobile phone and the Snapchat app, “It’s become an increasingly worrying aspect of society that these devices are playing such a prominent role.”

Mr Fuad described his client as an “attention-seeking Princess” who turned to Raza Khan for more attention. Fatima Khan cried uncontrollably as Judge Michael Topolski QC jailed her, “After the attack, your disrespect for Khalid reached new and inhuman depths when in an act of grotesque contempt for him you calmly walked towards him as he lay dying and while surrounded by the decent caring people who had stopped to help him.”

“You filmed him in the process of dying and took a still picture of him, all of which you sent with that chilling message to all your Snapchat friends. It’s hard to understand how anyone could act in such a cold and callous and despicable way.”

During the trial, jurors saw the gruesome footage on Snapchat as well as CCTV images of the fatal confrontation between Safi and 19-year-old Raza Khan.

Prosecutor Kate Bex QC said the two men had fought and argued over Fatima Khan a few years previous, and during that time Safi had been injured. In the run-up to the killing, jurors heard Fatima Khan had been in daily contact with Raza Khan via Snapchat.

Jurors heard Fatima became upset when “needy”. Mr Safi bought her a watch and gave it to her at her home five days before his death. Fatima Khan threw the gift at him out of an upstairs window because her family did not know about the relationship.

On the day of the killing, Mr Safi and Fatima Khan had gone to a Costa Coffee near to her work at Vigilant Security in North Acton. The couple were together on benches outside the coffee shop, before Raza Khan arrived in a minicab. He went straight up to them holding a 13-inch knife in his hand, the court heard. Ms Bex said: “Mr Safi produced a screwdriver and they began to fight. The fight lasted 15 seconds at most and it is caught on CCTV.”

“Mr Safi died at the scene having received a number of wounds to his chest, one penetrating his heart.” Raza Khan was injured in the fight but quietly left the scene and his whereabouts remain unknown, the court heard.

Explosion In County Louth Claims The Life Of A Young Man