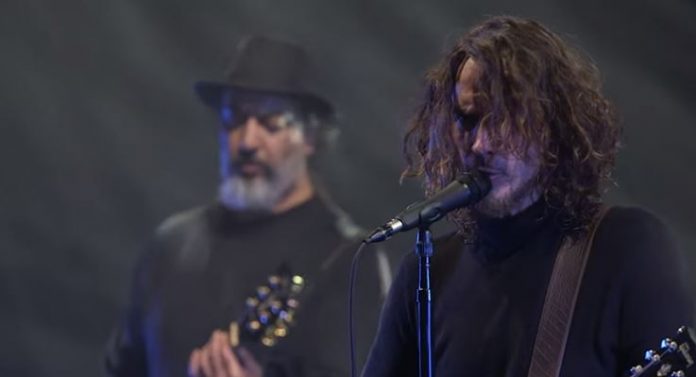 The video serves as the latest preview to their imminent drop, “Live From The Artists Den.”

Set for release on July 26, the live package comprises of Soundgarden’s show at The Wiltern in Los Angeles.

That was on the final night of a US tour in support of 2012’s awesome record, “King Animal”, as shot as part of the long-running concert series.

Lifted from the rockers’ fourth record, “Superunknown”,  the single earned the band Top 10 status in several countries across the globe.

The record itself debuted at No. 1 on the US Billboard 200. Speaking on behalf of Chris Cornell’s Estate Vicky Cornell said:

“This live show was really special, and I know how much fun Chris had that night,” “The idea of giving fans the opportunity to experience it in its entirety is something we are proud to share with them”

Antimusic reports that the Artists Den set, which will be available in multiple formats, including a Super Deluxe 4LP/2CD/Blu-Ray, limited-edition 4LP, 4LP, 2-CD or Blu-Ray packages. Watch the video below:

Metallica Have Raised Over One Million Dollars For Their Charity