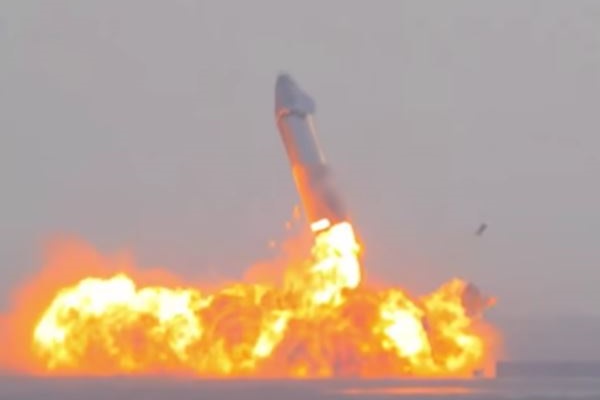 A ground-breaking achievement and a firework show afterwards… Seems like a pretty good day for SpaceX. Yesterday, the aerospace manufacturer witnessed another huge cusp as Starship SN10 successfully landed to achieve the first upright landing for the model.

The latest prototype from the Starship model enjoyed a successful launch from Boca Chica, Texas, albeit a short delay in the countdown. In a high-altitude test blast-off, the rocket soared around 10k into the sky before descending horizontally over the Gulf of Mexico and flipping upright in time to land.

The SpaceX prototype looked to have performed perfectly, prompting SpaceX Principal Integration Engineer, John Insprucker to declare “third time’s a charm”. However, disaster struck moments later as flames continued to burn at the base of the rocket. An automated fire-suppression system attempted to extinguish the flames, but the 150 feet tall rocket exploded eight minutes after landing.

It was the third attempt of the prototype to end in flames, after the failed attempts of SN8 in December and SN9 last month. SpaceX continue to develop the project which hopes to carry humans and 100 tons of cargo on future missions to the Moon and Mars.

There was no immediate comment from SpaceX on what went wrong. However, Elon Musk looked on the bright side in a tweet: “Starship 10 landed in one piece! RIP SN10, honorable discharge. SpaceX team is doing great work! One day, the true measure of success will be that Starship flights are commonplace.”

Starship is one of two Manhattan Projects that SpaceX is simultaneously developing, with the other being its Starlink satellite internet program. Falcon 9 rocket successfully launched a new batch of 60 Starlink internet satellites into orbit this morning. Musk has previously estimated that it will cost about $5 billion to fully develop Starship, although SpaceX has not disclosed how much it has spent on the program to date.

Musk remains “highly confident” that Starship “will be safe enough for human transport by 2023″, even though SpaceX only began the rocket’s development and testing in earnest in early 2019. Japanese billionaire Yusaku Maezawa has paid for a Starship flight around the moon by 2023. Maezawa on Tuesday announced that he is inviting eight members of the public to join his dearMoon mission, which will be a six-day journey to the moon and back.

Witness Starship SN10’s ground-breaking moment in the video below: