Radiohead frontman Thom Yorke has pulled his solo songs and those with his group Atoms For Peace from music streaming service Spotify, complaining that “new artists get paid fuck all with this model”. 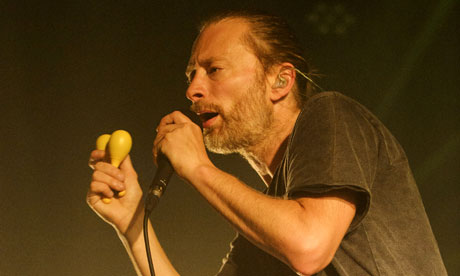 Yorke and producer Nigel Godrich took to Twitter to express their annoyance at the business model for new artists, and explain their reasoning.

“The numbers don’t even add up for Spotify yet. But it’s not about that. It’s about establishing the model which will be extremely valuable,”Godrich, whose production credits include albums for Radiohead and Paul McCartney, tweeted. “Meanwhile small labels and new artists can’t even keep their lights on. It’s just not right.”

He continued: “Streaming suits [back] catalogue. But [it] cannot work as a way of supporting new artists’ work. Spotify and the like either have to address that fact and change the model for new releases or else all new music producers should be bold and vote with their feet. [Streaming services] have no power without new music.”

The industry average offers slightly less than 0.4p a stream – meaning that 1m streams of a song would generate about £3,800. (€4,364.oo) Most songs receive far fewer streams.

In a statement, Spotify said: “Spotify’s goal is to grow a service which people love, ultimately want to pay for, and which will provide the financial support to the music industry necessary to invest in new talent and music. We want to help artists connect with their fans, find new audiences, grow their fan base and make a living from the music we all love.

Spotify has been having notable success getting some established bands to make their music available on its service: Daft Punk’s Get Lucky rapidly became one of the most-streamed songs ever.

Last month, Pink Floyd made its back catalogue available on Spotify after fans streamed the song Wish You Were Here more than 1m times.

Video: Dylan And Young Duet In Ireland For First Time In...