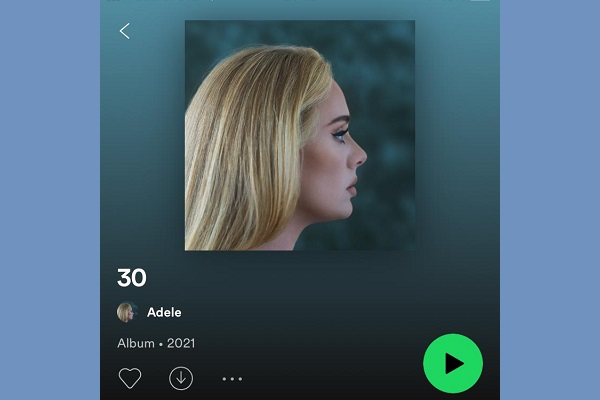 Spotify has been given special instructions to stream the latest Adele album, 30, in the order in which she has arranged. To fulfil the artist’s wishes, the default “shuffle” operation has been removed with the album set to play tracks in order.

Taking to Twitter, Adele highlights that artists do not “create albums with so much care and thought into our track listing for no reason. Our art tells a story, and our stories should be listened to as we intended. Thank you, Spotify, for listening”.

Replying to the singer on her post, Spotify said “@Adele Anything for you 🙏✨”, before later releasing a statement promoting the new feature. The statement hails their “new premium feature… to make play the default button on all albums”. A Spotify spokesperson said they were “excited” to be rolling out the feature which was “long requested by both users and artists“. In case listeners do like the shuffle function, fear not, as the option is still available.

The spokesperson continued to explain that although users can still shuffle, the system would begin to play tracks in the order chosen by the artist as default. “As always, we will continue to iterate our products and features to create the best experiences for both artists and their fans,” the statement concluded.

The latest album from Adele, her first album in six years, has been available on Spotify since its release on Friday. With the singer releasing 25 through physical and downloaded sales only, this marked a change in process. Her new album, 30, reflects on a turbulent period in her life, which included getting divorced from Simon Konecki.

Shifting more than 80,000 copies in its first week, the previous Adele album became the fastest-selling album in British history. It was not until June 2016 that it was made available on streaming sites such as Spotify, Apple Music, and Tidal.

“No Detectable Spread” Of Covid-19 Found At Liverpool Events