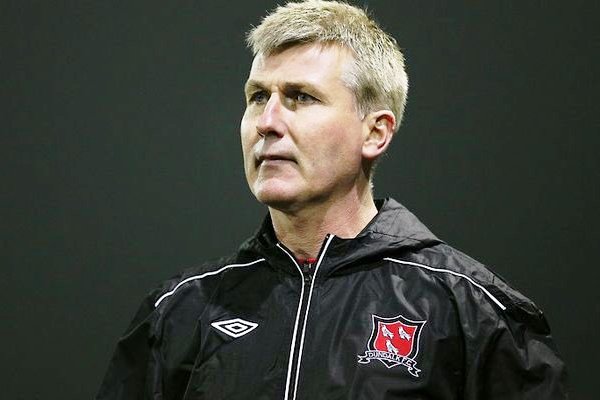 Meanwhile, another of his former clubs Derry City joined the Dublin outfit in registering their strong backing for Kenny to be given the top job in Irish football.

The 47-year-old began his managerial career with the Inchicore outfit’s under-21’s way back in 1997. The FAI have begun the process of searching for a new manager after Martin O’Neill left this week.

Mick McCarthy and Kenny reportedly leading the betting markets as likely contenders to be named as a new manager.

The Inchicore club have released a statement calling for the Dundalk boss to replace Martin O’Neill. They claim Kenny’s appointment would be a huge boost for the domestic league and grassroots football.

“The board of St Patrick’s Athletic FC, as stakeholders in Irish domestic football, have convened and endorse and recommend Stephen Kenny for the vacant position as manager of the national team.

We believe Stephen Kenny is the best candidate and that he has proven he has the experience, knowledge, commitment and intellect to change the current direction of the Irish senior team.

Stephen’s appointment would undeniably be a boost for both the grassroots and domestic leagues. All involved would know that the country’s game would be in the hands of a man who knows and believes that the future of the game is in the nurturing and proper and professional development of the game in schools, communities, academies and clubs countrywide. “We hope that all stakeholders of the domestic game that agree, express their view in the public forum.”

Derry City Football Club are aware that the FAI are considering a number of candidates for the vacant role of manager of the Republic of Ireland football team including Stephen Kenny.

We would like to wish Stephen every success in the process and if selected we believe he would be an excellent choice.

Currently Stephen is the most successful manager in the League of Ireland and his appointment would be just reward for his commitment to the local league and the success he has achieved in raising the profile of the league in European competition.

With a number of former Derry City players and other League of Ireland players representing the national team we would be delighted to see a former manager of our club having the ultimate honour of managing the Irish national team.

We wish him every success.

Cristiano Ronaldo And Portugal Expected To Triumph Over Iran