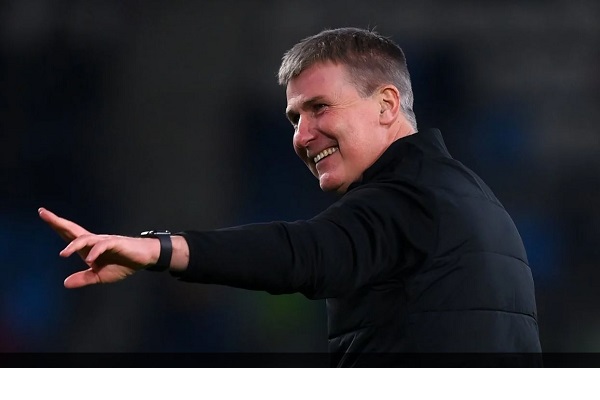 Republic of Ireland manager Stephen Kenny has hit out at “disparaging” comments made post match from his Luxembourg counterpart Luca Hotlz, regarding Irish players from the past.

Stephen Kenny’s future as manager has been subject to debate. With eight months remaining on his current deal, many people have called for a contract offer to be put on the table for the former Dundalk supremo to take Ireland into the qualifying campaign for Euro 2024.

It has also led to some firery exchanges of views between pundits like Liam Brady and Richie Sadlier. More on that story here.

Following this impressive win, Stephen Kenny said that future is bright for a team he has built.

He also added, “The spine of the team is still there, we are putting ourselves in place to have a strong Nations League campaign and leading on from that a really strong campaign to qualify for the Europeans Championships”.

On his contract situation Kenny stated, “That’s the way I’ve always viewed it, whether it was decided it was me or not. I’ve tended not to be fixated on it (the contract), what will happen will happen”.

Along with blaming the referee for last night’s defeat, Holtz also accused the Irish managment of unsporting conduct afterwards.

“I’m very disappointed with the behaviour of the staff of Ireland”, Holtz said. “They played the big guys because they were winning. That is not very fair play”.

Kenny took exception to these remarks.

“I’m disappointed that he denigrated all the great players that played for Ireland”, he said.

“All these players who represented Ireland, and Robbie Keane and Damien Duff, and the great players in the modern era”.

“It is wrong to say they just fought for second balls and that it was caveman football for 100 years”, Kenny added. “To say that was unacceptable.”

Three Arrested After 250K Drugs Bust In Dublin And Wicklow