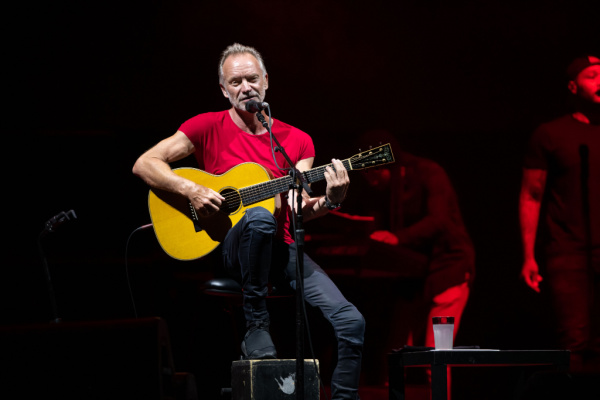 As part of his ‘My Songs’ Tour, Sting has announced a live gig at Dublin’s Malahide Castle for next Summer. You can check the tour dates below.

The former Police singer has announced this show, along with several UK dates as part of this 2023 tour.

The UK leg of the tour will see Sting perform at places like Beford, Halifax, Cardiff, and Scarborough.

On June 30, the singer will feature at the Lytham Festival, as part of a star studded line up including George Ezra, Jamiroquai, as well as part of Def Leppard’s and Motley Crue’s joint UK and Ireland tour.

Tickets will go on sale this Friday (November 18), and they can be purchased here.

Earlier this year, Sting showed his support for Ukraine in their ongoing conflict with Russia, by releasing a brand new cover his track ‘Russians’.

The song which features on his 1985 solo album The Dream Of The Blue Turtles, was inspired by the Cold War between the US and Russia and eschews mutually assured destruction.

“I’ve only rarely sung this song in the many years since it was written, because I never thought it would be relevant again”, the singer said. “But in the light of one man’s bloody and woefully misguided decision to invade a peaceful, unthreatening neighbor, the song is, once again, a plea for our common humanity”, Sting can be heard saying in the music video.

He also added, “For the brave Ukrainians fighting against this brutal tyranny and also the many Russians who are protesting this outrage despite the threat of arrest and imprisonment: We, all of us, love our children. Stop the war”.

On top of this, Sting also sold his entire songwriting catalogue to Universal Music Group for £184 million. More on this here.

Trio Of Bowie Live And Studio Recordings To Be Released