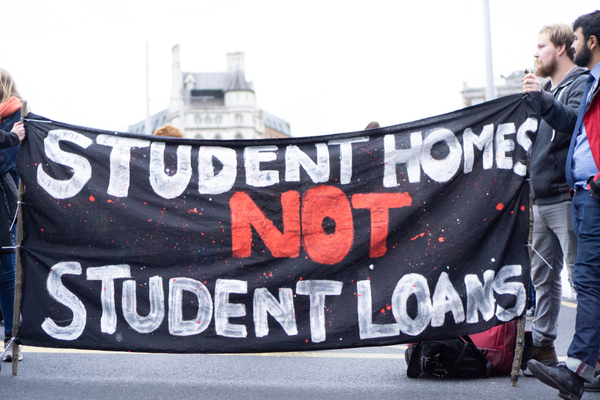 A staged protest is ongoing outside the Dáil amid growing concerns over the lack of student accommodation across Ireland. According to representatives from the Union of Students in Ireland (USI), thousands of people have been left without accommodation in time for the new academic year.

Protestors will sleep outside the Dáil building tonight following USI president, Clare Austick highlighting the many students being forced to stay in hotels, B&Bs, and even hostels, or face commuting long journeys to and from college.

As well as declaring an accommodation crisis, Ms Austick also calls for the government to provide long-term effective and sustainable solutions for students.

“This all comes down to access to education. Students have been priced out of education because there’s no accommodation that they can stay in, and enough is enough and this is why we’re here to be heard.”

Claire Austick, president of @TheUSI said thousands of students across the country have been left without a place to live. Students are calling on the Government to provide purpose-built accommodation as many are forced to stay in hostels and B&Bs. pic.twitter.com/sLmgAHwZqf

Beth O’Reilly, sabbatical officer with the USI and former graduate of UCC, believes the problem has worsened over recent years. She accuses the government of wanting to “pull the wool over our eyes” and states: “so, we’re bringing the crisis to their doorstep”.

O’Reilly said they “have to really reckon with what their policies have caused” to the population. Overcoming the struggle of grade inflation, she points that many students, particularly internationals, are now facing huge issues in getting accommodation.

“The delayed Leaving Cert results meant that a lot of students didn’t know where they were going to be attending college until a lot of the accommodations was already snatched up. It’s been difficult across all year groups, but I do definitely feel for first years who are really thrown right into the deep end.”

Currently, there is a huge shortage of rental properties in student areas, now spreading to rural areas, including Waterford and Carlow. Dublin City University claim it is experiencing “unprecedented demand” for on-campus accommodation, receiving “at least four applications for every bed-space available”, and now allocate all our rooms with a waiting list operation.

Responding to Sinn Fein TD, Pearse Doherty’s comments on the “ridiculous and unsustainable” lack of accommodation, and calls for more protection, Tánaiste Leo Varadkar said: “It’s something the Government is very much aware of, the challenges that students face as they return to third level education. We responded by increasing the student-assistance funds. COVID-19 has had a significant impact on the availability of bed spaces in on-campus accommodation.”

It's time government started listening to the student living in a tent or the 50 year old woman living in a shed without running water. We are here because the government has looked at housing as an investment for speculators as opposed to as homes for our people – @PearseDoherty pic.twitter.com/6eyPpcMwV6