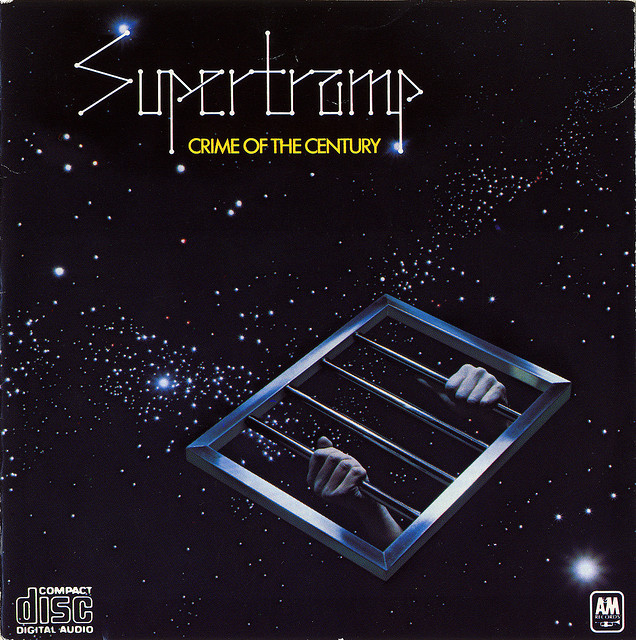 Crime of the Century is the third studio album by Supertramp and it was released in September of 1974. The album was Supertramp’s commercial breakthrough in both the US and the UK.

Supertramp came into their own on their third album, 1974’s Crime of the Century, as their lineup gelled but, more importantly, so did their sound. The group still betrayed a heavy Pink Floyd influence, particularly in its expansive art rock arrangements graced by saxophones, but Supertramp isn’t nearly as spooky as Floyd.

They’re snarky collegiate elitists, an art rock variation on Steely Dan or perhaps a less difficult 10cc, filled with cutting jokes and allusions, best heard on ‘Bloody Well Right’. This streak would later flourish on Breakfast in America, but it’s present enough to give them their own character.

Musically, on Crime of the Century Supertramp play 70’s radio-pop with strong progressive tendencies. Neither side of Supertramp is superior over the other and they seem to play off of each other. Whenever the band lay heavy on their prog-chops they are quick to revert to their more sensible pop side. This keeps the music interesting and fresh since there are many shifts in the music stylistically and in time signatures.

Also present on the album is a slight sentimental streak and a heavy fondness for pop, heard on ‘Dreamer’, a soaring piece of art pop that became their first big hit. That and ‘Bloody Well Right’ are the concise pop moments on the record; the rest of Crime of the Century is atmospheric like Dark Side of the Moon, but with a lighter feel and a Beatles bent.

At times the album floats off into its own world, with an effect more tedious than hypnotic, but it’s still a huge leap forward for the group and their most consistent album outside of that 1979 masterwork, Breakfast in America.

3. Hide In Your Shell

7. If Everyone Was Listening

8. Crime of the Century

You Can Listen To Arcade Fire’s ‘Funeral’ From Midnight Tonight