Home News Swedish Art Project Will Pay A Salary For Doing Nothing Forever! 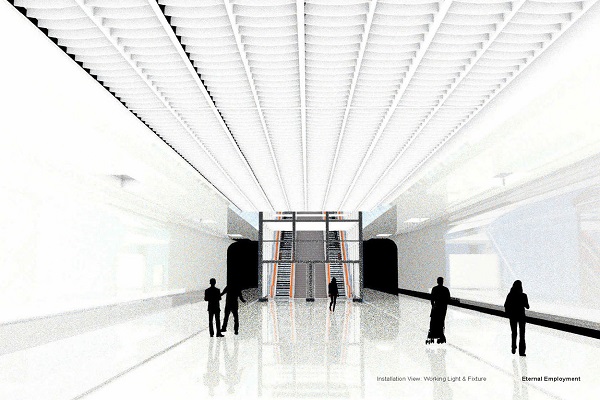 Want to get paid to do nothing? That’s the actual job description of a very interesting job on offer. An artwork. in the literal sense.

An art project funded by Public Art Agency Sweden (Statens konstråd) will soon be opened at Korsvägen train station in Gothenburg. The installation which shows an office space requires a paid worker to clock in every morning.

Once the worker punches their time clock, a bank of fluorescent lights will turn on to allow commuters to watch them at work.

The project is called Eternal Employment and is the brainchild of the artist duo Jakob Senney and Simon Goldin. The title ‘Eternal’ because the job is “of indefinite duration” and ‘Employment’ because whoever takes this position will be paid wages on a par with an average public sector worker.

That includes the usual benefits like holiday pay and pension contributions. The worker’s salary will start at 21,600 kronor (€2,032) per month and will increase by 3.2 per cent annually for at least 120 years, presuming that whoever is selected for this job will eventually quit and be replaced by others.

Great care has been taken with the physical infrastructure at the station. Goldin recently spoke to The Local, saying that whoever gets the job will not just be put on display to amuse visitors to the station. It will also facilitate the employee who does want not to be seen by anyone unless he/she chooses so.

They do not want to ‘exhibit’ a person in that sense, but they can choose to make their position public themselves,” He added that the employee doesn’t even have to actually spend the day at Korsvägen. The worker can clock in at the start of the working day, leave, and then return to clock out, if they want.

One of the terms of the job contract outlined states that the employee cannot “take on other paid employment during the working hours of the Eternal Employment position”, however, this clause is fairly loose with Goldin saying that the person could choose to spend their time writing a novel or engaging in similar creative work.

A poem written by poet Lina Ekdahl as a mock up of a job advert has been written. It states:

Sign me up! According to Goldin, the poem was inspired by “the context in which the artwork is situated”. He said when he wrote the proposal he was unemployed and receiving unemployment benefits.

It was their unemployment officer who suggested that he and Senney apply for the 2017 competition which called for public art design submissions for Korsvägen.

In their proposal, they suggested using the station to make a statement about “a measure of our growing inequality” and to question “the very notions of growth, productivity and progress which are at the core of modernity.”

Magdalena Malm, the director of Public Art Agency Sweden and chairperson of the selection committee, said there was “a very strong consensus” amongst the jury that Eternal Employment was the best submission.

Malm said that while the project proposal touches on very complex issues like inequality and the future of work, it does not aim to provide solutions.

“This is not an artwork stating things, it is an artwork questioning things. In the future, we are going to see less and less of the permanent employment that we have today so the intention is to spark thoughts and discussions on the what the future of work will look like.”

The project won’t begin until the station opens in 2026 and applications won’t be accepted until 2025.