Nova News Team - March 28, 2017
0
Machine Head is the sixth studio album released by the English hard rock band Deep Purple. It was recorded through December 1971 in Montreux, Switzerland, and released in March 1972

On This Day In Music: The Beatles Perform Their First...

Nova News Team - March 21, 2017
0
On the 21st of March 1961 The Beatles played their first ever evening show at The Cavern Club in Liverpool, supporting The Swinging Bluegenes, (later to become The Swinging Blue Jeans). The band had played previous lunchtime slots at the venue but were now branching out into the evening slots. The Beatles had recently returned from Hamburg, and made their first evening appearance as the Bluegenes' guests. The Bluegenes were uncomfortable with the success of the group and told the Cavern's owner, Ray McFall, to choose between them. Mcfall, recognising the talent that was in front of him, chose the Beatles.

Nova News Team - March 20, 2017
0
Chuck Berry, a man who is wildly considered to be the pioneer of Rock Music, has died aged 90. Police in Missouri announced on their twitter and Facebook that Berry had been found unresponsive at his home on Saturday afternoon. They reported that they had tried and failed to revive the musician. Tributes have come pouring in for the Guitarist with many giving him his rightful dues as the master mind behind the creation of Rock Music. The New York Times described him as “Mr. Berry was its [Rock N’ Roll] master theorist and conceptual genius, the songwriter who understood what the kids wanted before they knew themselves.”

Nova News Team - March 16, 2017
0
This Paddy’s Weekend is RADIO NOVA’S BIGGEST IRISH WEEKEND EVER. We have jam packed the schedule this long weekend with the very best home grown hits and musical talent. And we have an even bigger giveaway to top it off! Every hour from 10am-7pm on Friday and 10am-6pm on Saturday & Sunday you will be in with a chance to be entered to our draw to win the best Paddy’s day prize EVER: 2 tickets to see U2 at their sold out Croke Park gig doing The Joshua Tree: Saturday July 22. Bono & Co. hit the road this summer to celebrate the 30th anniversary of their Joshua Tree album. The tour will kick off in Vancouver in May and U2 will of course be home, July 22nd to take to the stage for their sell out gig at GAA headquarters, Croke Park. The Dublin band will be supported by Noel Gallagher’s High Flying Birds during the European leg of the tour, which includes the band’s Dublin date. 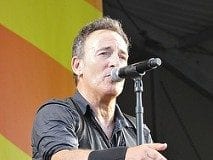 On This Day In Music: Streets Of Philadelphia Won Three...

Nova News Team - February 17, 2017
0
Beach boy fans are in for a treat. Brian Wilson is set to return to Ireland this summer with his 50th Anniversary Pet Sounds Tour. The Beach boys frontman will perform the iconic album in its exact running order - followed by a set of the best of Brian Wilson and Beach Boys material, during which he'll be joined by Al Jardine and Blondie Chaplin. Watch the 74 year old perform “Wouldn’t It Be Nice” during a Pet Sounds 50th Anniversay concert in Grand Prairie, Texas here.

Nova News Team - February 16, 2017
0
A pair of Velvet trousers once worn by Mick Jagger, Keith Richards and Gram Parsons are to hit the auction block. The three rockers shared the blue velvet trousers after they were initially custom made for Jagger.

Nova News Team - February 15, 2017
0
Elbow’s seventh studio album Little Fictions is currently number one in the album charts. The follow up to 2014’s The Take Off And Landing Of Everything, is the second number one album for the British four piece.
1234...14Page 3 of 14