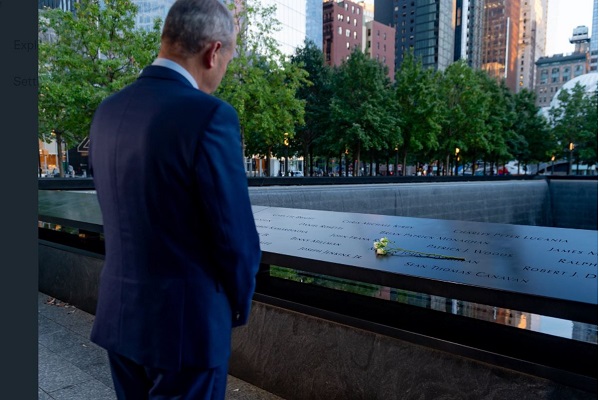 Taoiseach Micheál Martin has visited the 9/11 Memorial in New York as part of his visit to the US. He is on a five day visit to the Big Apple.

Along the memorial, each of the names of the victims of 9/11 are inscribed on the south pools of the site.  While at the memorial, Mr Martin stopped to read the names of Irish people who had lost their lives on the 11 September attacks, which claimed the lives of almost 3,000 people.

This hijacked plane then crashed into the World Trade Center.

Mr Martin also laid a rose beside each of the names of the six Irish victims.

“Moving visit to the 9/11 Memorial in New York last night, to leave flowers and read the names of the Irish people, and all those, who lost their lives 20 years ago”, the Taoiseach wrote.

Moving visit to the 9/11 Memorial in New York last night, to leave flowers and read the names of the Irish people, and all those, who lost their lives 20 years ago.#September11 #NeverForget pic.twitter.com/m0NqzpyJuT

Mr Martin also paused at the “Survivor Tree”. This is a tree which was discovered in the ruins of the attack. This were nursed back to health and placed on the memorial in 2010.

As part of his five day visit, Fianna Fáil leader Micheál Martin is also due to chair a meeting of the UN Security Council on Thursday. He is also due to address the United Nations Assembly on Friday.

Yesterday, Micheál Martin called the return of workers to the office in Ireland a “significant milestone” and an “important day for the economy” as Covid restrictions in Ireland continue to ease.

“Today marks another significant, and welcome, milestone for Ireland as we continue to emerge from the Covid-19 pandemic”, he said.

Yesterday saw thousands of office workers return to the workplace for the first time since March 2020. More on this report here.

Riots Rampage Through the Netherlands As Hospital Targeted and COVID Testing...