A teenager’s been arrested in connection with the murder of Cameron Reilly in County Louth.

The body of the 18-year-old was discovered in a field in Dunleer almost three weeks ago.

Cameron Reilly was last seen in the Ardee Road area of Dunleer just after midnight on Saturday, May 26th.

His body was found in a field on the outskirts of the town at around 8 o’clock that morning.

A post-mortem revealed that he was strangled to death.

Gardaí are investigating reports that there were a number of young people present when Cameron was murdered.

This morning detectives from Drogheda arrested an 18-year-old man in connection with the investigation.

He’s been held at Drogheda Garda Station and can be held for up to 24 hours.

Despite a large scale search – Cameron’s phone – which Gardaí believe holds vital clues as to those responsible for his death – has never been found. 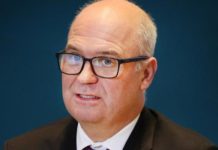