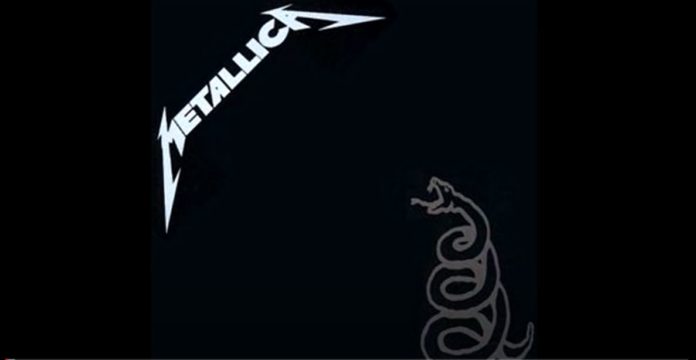 The album was orginally released on 12 August 1991. The Black Album is also one of the highest selling albums of any genre over the last 30 years. 35 million copies were sold globally, while 17 million were sold in the US.

“So many things changed for us externally after The Black Album release”, Hetfield said.

“The perception of the importance of Metallica changed greatly. Obviously with songs like ‘Sandman’, ‘Unforgiven’, ‘Nothing Else Matters’ becoming embraced by a lot of the world, we became a household name. It changed our lives and hopefully helped the world connect”.

This pack contains a 750ml bottle of Batch 114 finished with Blackened’s propreitary Black Noise sonic-enhancement process tuned to songs from the Black Album.

The pack also includes a Snakebyte Cocktail Booklet and a collectable whiskey coin.

The booklet itself includes riffs from the classic whiskey “Snake Bite” drink. These riffs were also created by some of today’s rock star bartenders from across the US. It was also named after James Hetfield’s ESP signature guitar.

The booklet also contains a list of recipes on the classic whiskey “Snake Bite” drink.

The pack is available here.

The whiskey comes from a blend of straight bourbons and ryes which have been aged for eight plus years. It is finished in black brandy casks to the low hertz frequencies of Metallica’s music through the Black Nosie sonic-enhancement process.

The whiskey is also pummeled by the low frequencies inside the barrels. This leads to more interaction between the wood and the whiskey. More flavours and colour are extracted from the barrel.

Blackened was launched in 2018, from a collaboration between Metallica and master distiller, the late Dave Pickerell. Rob Diertrich joined the fold in 2019, following the death of Pickerell.

Diertrich was in charge of the blending, sourcing and cask finishing of the barrels for each batch.

This latest release from the company also follows the Batch 106 which was sonicaly enhanced to a playlist from the Metallica and San Francisco Symphony album “S&M2”. It went on to win gold at the awards at the American Blended, Special Barrel Finish category.

A few weeks ago, Metallica teased fans about a possible reissue of that 1991 classic album.

A clip from the band’s 1992 performance in San Diego was posted on their instagram account which got fans excited. More on that here.

Jame Hetfield also said that Metallica had written over 10 new songs during lockdown, over a series of Zoom calls.

It was also recently reported that the band are to sue Insurance Company Lloyds over financial losses as a result of cancelled shows due to the pandemic. More on that report from Nova here.

You Can Listen To John Lennon’s ‘Imagine’ Tonight From Midnight