Home Music The Offspring Are Safe After Their Vehicle Catches Fire On Route To... 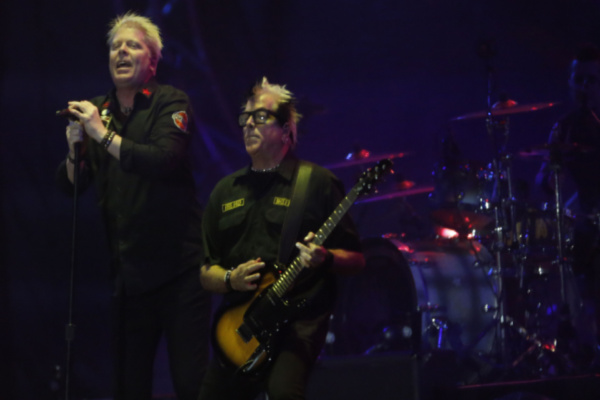 The Offspring have confirmed that they are safe, after one of their cars caught fire whilst en route to a show in Canada.

The band were on their way to Rimouski last weekend (August 6), when the car suddenly caught fire.

The Offspring tweeted that “something flew off the vehicle in front of us”, and that something got stuck underneath one of the cars.

A video was also shared, showing the car engulfed in these flames by the side of the road. The band did report that their “luggage, passports, laptops and pretty much everything else was destroyed”.

Thankfully, the band members and entourage are safe and well. You can also see the footage for yourselves below.

While traveling through Canada yesterday, something flew off the vehicle in front of us and became wedged underneath one of our SUVs and it caught fire. Everyone got out safely, but the luggage, passports, laptops and pretty much everything else was destroyed. pic.twitter.com/8CjLep1Bei

Despite this adversity, the Offspring did make to Rimouski safely, where they confirmed that the last of their three Canadian shows would go ahead.

“could’ve been much worse”

On top of this, The Offspring guitarits Kevin “Noodles” Wasserman also shared a series of photos from the wreckage via Instagram.

“No one was hurt”, he wrote. “Everyone got out of the vehicle unscathed… it could’ve been much worse. The band & I are so thankful & relieved that all involved are OK”.

He also added, “Our crew do all the heavy lifting so that we look & sound as good as possible when we take the stage,” he continued. “They’re [sic] travel & workdays are always longer & more arduous than ours, and we can’t thank them enough for all they do”.

“To see them have to go through something like this is heartbreaking & frightening. I am so glad they are all OK!”.

The Offspring are currently supporting their latest album ‘Let The Bad Times Roll’. Along with Canada, they will also hit Japan, Austrailia and Europe. Dates for their European tour can be found here. Tickets are available here.

Our tenth studio album ☠️ LET THE BAD TIMES ROLL ☠️ is now available everywhere! Give it a listen now, then let us know your 3 favorite songs below ↓ https://t.co/SAt7eMgsbV #LTBTR pic.twitter.com/eP5WLifJq8