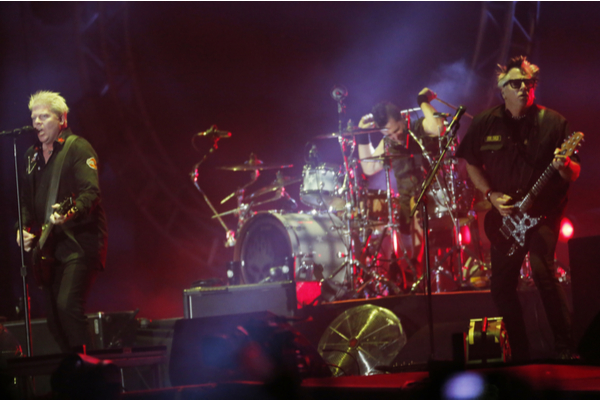 The Offspring have launched their own version of James Corden’s Carpool Karaoke, with Cockpit Karaoke.

This series will see guitarist Kevin Wasserman aka Noodles and frontman Dexter Holland sing along to some of the band’s biggest hits from inside a private jet. Dexter Holland who is a licensed pilot, will also be flying the plane.

For their first installment of the series, the band will sing their hit “Come Out And Play” as well as “Keep ‘Em Separated”.

“No one’s done that”

Speaking about this venture, Dexter Holland said, “We know everyone’s heard of Carpool Karaoke, but Cockpit Karaoke??? No one’s done that!!”.

“Since I’m a pilot, we thought it would be great if Noodles and I had some fun and got to sing along to some of our many hits”, he added.

The Offspring also released their 10th studio album “Let The Bad Times Roll” earlier this year. Both Holland and Noodles explained why it took 9 years for the band to come out with new material.

“It’s almost like the time had to be right for this record for whatever reason it just wasn’t right until now”, Holland said.

“Where we’re at in the world is just a sort of onslaught of bad news and bad things. ‘Let the Bad Times Roll’ sounds like an attitude amongst the people who are like ‘Bring it! What else you got?!’”.

The album spent 10 weeks at number one in Canada. See here.

Our tenth studio album ☠️ LET THE BAD TIMES ROLL ☠️ is now available everywhere! Give it a listen now, then let us know your 3 favorite songs below ↓ https://t.co/SAt7eMgsbV #LTBTR pic.twitter.com/eP5WLifJq8

The Offspring’s UK and Ireland Tour

Back in April, the band also announced a tour of Ireland and the UK for later this year.

The Offspring will perform live at the 3Arena on 21 November 2021.