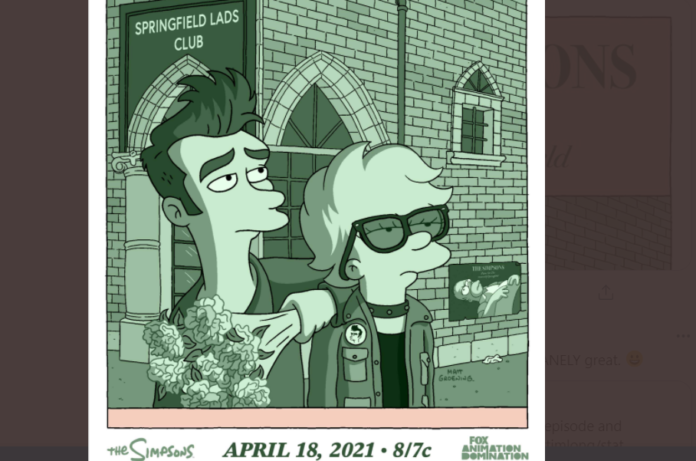 The Simpsons are to send up The Smiths in their upcoming episode over the weekend. It marks the show’s latest chapter in it’s long history in paying homage to popular culture. It also airs on April 18.

This episode is titled “Panic On The Streets of Springfield”. It is to see Lisa get a new imaginary friend, a depressed Indie singer from 1980s Britain.

While the show will not feature the Smiths frontman Morrissey, this Indie singer is to be voice by another British star Benedict Cumberbatch.

Despite this being the first Simpsons episode to feature the band, it is also said that Morrissey had turned down the chance to feature on the show for a season 15 episode “The Regina Monologues”.

The Simpsons writer Tim Long also tweeted this, “Okay, that’s it: best three “Simpsons Smiths songs” get a physical copy of this poster for their mopey bedroom wall”.

Okay, that's it: best three "Simpsons Smiths songs" get a physical copy of this poster for their mopey bedroom wall. Use hashtag #SimpsonsSmiths pic.twitter.com/LXy9ozELIW

The promotional still from the episode features Lisa Simpson alongside a quiff sporting Morrissey look-a-like. They are standing outside the Springfield Lads Club. This is referring to The Smiths’ shot outside Salford Lads Club.

The cultural impact of The Simpsons was once again felt in the dictionary recently. The word “embiggens “ was ackowledged by Dictionary.com.

The word had been orginally used in a episode from 1996 again featuring Lisa. In it, Lisa makes the devastating discovery that Springfield’s Town founder Jebediah Springfield was a murderous pirate.

Lisa subsequently upsets the local residents who refuse to accept that their founder actually hated his people and was far from perfect.

“Embiggened” was also included in the Oxford English and Merriam-Webster dictionaries in 2018.

It was also reported this week that The Simpsons animater and director Edwin Aguilar sadly died aged 46. Aguilar had suffered a stroke while in hospital.

The news was confirmed on a GoFundMe page. Aguilar had been suffering from diabetes and kidney issues. Along with the Simpsons, Aguilar had worked as animater from Graz Entertainment (G.I Joe) and Hanna Barbera. He then joined Chuck Jones for a number of Warner Bros Shorts.

According to the Hollywood Reporter, he joined the Simpsons as “an animator, character layout artist, storyboard revisionist, assistant director, and more”. He also worked on the Simpsons Movie in 2007.

Executive producer Matt Selman paid tribute to Aguilar. He tweeted, “We @TheSimpsons family are mourning the loss of animator Edwin Aguilar — a talented artist and beloved fountain of love and inspiration to all”.

This all comes after it was revealed this week that Simpsons actor Hank Azaria apologised for the “structural racism” in voicing the character Apu on the show.

Azaria voiced the Indian shopkeeper Apu Nahasapeemapetilon since 1990. Controversy had grown over the show’s racial stereotyping. Azaria stepped away from the character last year as part of a change in casting cultural animation.

The actor recently said that he “feels like I need to go around to every single Indian person in this country and personally apologise”.

You can read more about that that story in Nova’s report here.