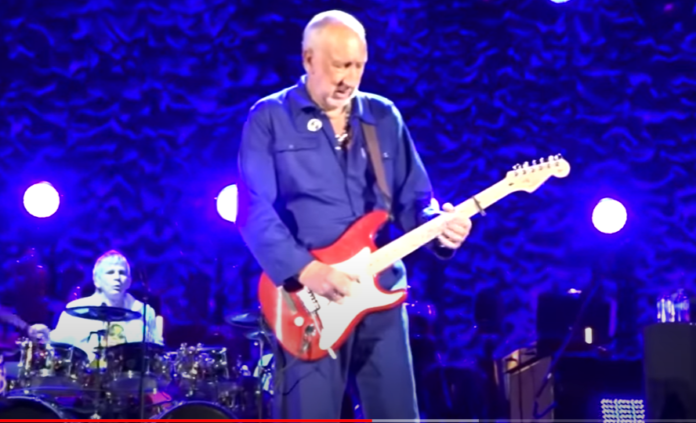 The Who’s guitarist, Peter Townshend has donated his blue boiler suit and “kimono” coat for an auction in aid of MusiCares Charity Relief. This event is presented by Julien’s Auctions. It will take place in Beverley Hills, online on Sunday Jan 31 at 1pm Pacific Time.

Townshend wore these items during The Who’s 2019 “Moving On” Tour at Wembley in July 2019. He also wore them performing in Alpine Valley and Jonas Beach in September and the Hollywood Bowl in October of the same year.

The boiler suit also made appearances in Seattle and Boston. He wore these items as a nod to his iconic white boiler suit which he wore to promote their album “Tommy” in 1969 and 1970. These include the Isle of Wight and Woodstock music festivals.

Townshend’s suit also featured on the cover of his solo album “Who Came First” from 1972.

MusiCare provides a safety net to assist musicians in times of need. It’s played an even more integral part, since the pandemic which has has halted progress of many in the industry. Julien’s Auctions are in charge of the sale and as of this morning, the items were sitting on 9k. See here if you fancy bidding for Townshend’s suits!

Photos of Townshend on stage wearing the boiler suits can be viewed here.

The band also recently set up a fundraiser by selling Townshend’s legendary guitar at another auction. The band raised £535,840 for Stagehand. Stagehand are an organisation who distribute funds to stage crew of bands who have been affected by the Covid-19 Pandemic.

We also brought you the unfortunate news earlier this month, that the Who were forced to postpone their tour for the second time. They were due to perform live in March and April 2021. However, like most things at the moment, those hopes were shelved for now due to the pandemic.

Despite this, Roger Daltrey offered fans some hope by urging them to keep their tickets, as these gigs “will happen”, according to the lead singer.