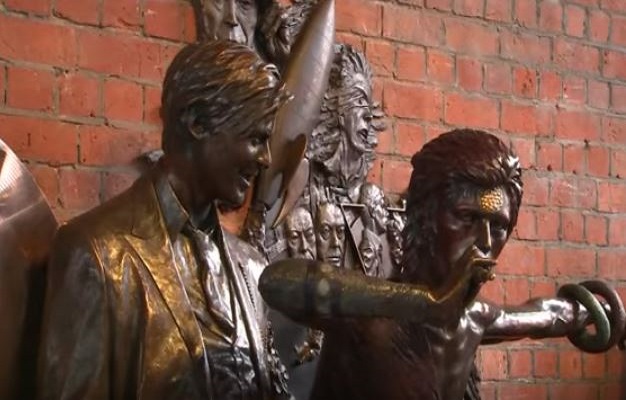 The world’s first statue of David Bowie has already been vandalised, only days after it was unveiled in Buckinghamshire. According to the NME, the statue has since been cleaned.

The effigy of Bowie was unveiled last Sunday and has been covered in graffiti that reads ‘feed the homeless first’ as well as ‘RIP DB’.

Some Dickheads about. Bowie statue vandalised within 48 hours of unveiling pic.twitter.com/u4gBpwSo0M

The statue is located at Aylesbury Market Square, near the town’s Friars music venue where Bowie reportedly debuted his Ziggy Stardust persona in the early 1970s. David Stopps handled a successful crowdfunding campaign for the statue, which raised £100,000 and some support from several grant schemes.

Even though the graffiti takes aim at homelessness in the area, Deputy Mayor Mark Willis has highlighted the fact that no public money was spent on the statue.

“I want to point out that this statue received precisely £0 of public money. That’s right, £0. It was entirely funded through crowdfunding, by members of the public, myself included. One of the charities I support monthly is Shelter as homelessness and poverty are absolute scourges on society that need solving.”

Speaking to Mix96 David Stopps said: “I was very disappointed that this has happened, but when I went to see it; it could have been a lot worse. We’re busy cleaning it up now. The paint was on the statue, the wall behind and on the pavement. It was about the homeless – but I do quite a lot for the homeless, which is the irony of the whole thing.”

Meanwhile, The NME reports, that a David Bowie super fan has promised to donate £5,000 to a homeless charity if the person who vandalised a statue of the late music icon comes forward.