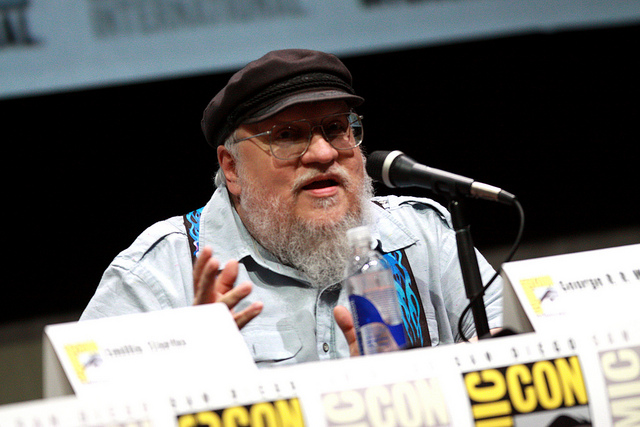 George RR Martin, being the constant tease that he is, is getting Game of Thrones fans excited about the possibility of not one but TWO books hitting the bookshelves next year.

He took to his Livejournal to make the news and clear up the rumours that he has Winds of Winter completed and is just refusing to release it because he’s trying to mess with our heads. He wrote

“I don’t know which story is more absurd, the one that says the book is finished and I’ve been sitting on it for some nefarious reason, or the one that says I have no pages. Both ‘reports’ are equally false and equally moronic. I am still working on it, I am still months away (how many? good question), I still have good days and bad days, and that’s all I care to say. Whether WINDS or the first volume of FIRE AND BLOOD will be the first to hit the bookstores is hard to say at this juncture, but I do think you will have a Westeros book from me in 2018… and who knows, maybe two. A boy can dream…”

For those not in the know, the Fire and Blood book he is referring to is two-part history of the Targaryen family. You know, the lads with silver hair that love to fly around on dragons and burn cities to the ground.

In an in depth interview with The Time, he also give insights about his involvement with the show and what parts of the show that he wasn’t the biggest fan of.

In relation to his involvement in the show, Martin states that while he still involved in the show he is less so as the years go on.

“I’m a co-executive producer on the show; David and Dan are the showrunners. Right from the first, we knew that they were going to do the lion’s share of the work, but I did wanted to be involved…. And in the early seasons, I wrote one script per season. I would have gladly done more, but there just wasn’t time. I’m still trying to do these books. It takes me about a month to write a script and I didn’t have a month to spare, so I said, I think I’ll sit out season 5. I’ve sat out seasons 6 and 7 too, just trying to concentrate on this book, which as you know is massively late . So in that sense, my involvement in the show has diminished over time, though, I’m still here whenever they want to talk to me, and I’m always glad to weigh in.”

As to what parts of the show he’s not that into, he explains he didn’t agree with the exclusion of Lady Stoneheart in Game Of Thrones TV Show.

“At some points, when David and Dan and I had discussions about what way we should go in, I would always favor sticking with the books, while they would favor making changes. I think one of the biggest ones would probably be when they made the decision not to bring Catelyn Stark back as Lady Stoneheart. That was probably the first major diversion of the show from the books and, you know, I argued against that, and David and Dan made that decision.

In my version of the story, Catelyn Stark is re-imbued with a kind of life and becomes this vengeful wight who galvanizes a group of people around her and is trying to exact her revenge on the riverlands. David and Dan made a decision not to go in that direction in their story, pursuing other threads. But both of them are equally valid, I think, because Catelyn Stark is a fictional character and she doesn’t exist. You can tell either story about her.”

Despite the difference of opinion between the Game Of Thrones producers and Martin, there seems to be no hard feelings between Martin and the Show runners. Which is a good thing because we all know how in George RR Martins mind how he deals with internal conflicts. *cough* Red Wedding *cough*

Game Of Thrones Season 7 Episode Two will be on our screens tonight.