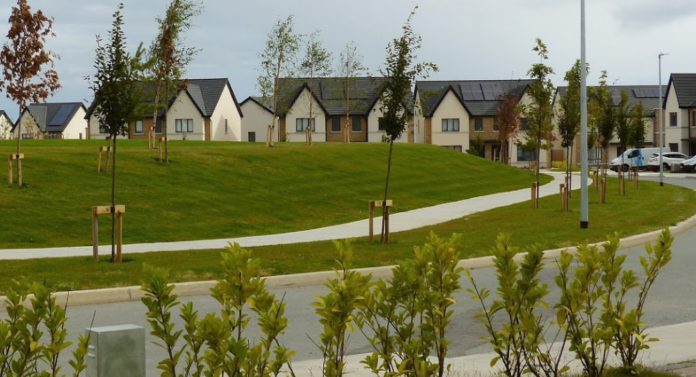 A young woman was struck by a car whilst walking her dog in North Dublin. After hitting her, the driver drove off, leaving her in the middle of the road. Gardaí are investigating the incident.

The woman was out walking her pup, when a coloured hatchback car came speeding around the corner on the wrong side of the road, before hitting her. It sent her flying.

Despite this, the driver failed to stop, and drove off, leaving the poor woman lying “broken” on the ground.

This incident occured near the T Junction with Taylor Hill View on Taylor Hill Green, shortly before 6pm Sunday evening.

The young woman is hopeful that witnesses may come forward so Gardaí can find the driver of the vehicle.

She was taken by ambulance to Beaumont Hospital. She spent the next 20 hours being treated for concussion.

What she had to say:

On the ordeal, she said, “It could be a lot worse so I’m happy for that. But, I’m feeling broken. When I move around, I feel I could just snap”.

“I came out with concussion and my neck and back are still very sore” she explained.

She added, “I’m getting headaches but it could have been worse, so I’m happy with that”.

Turned into a nightmare:

The young woman was amazed how a simple walk with her pup, could turn into a nightmare.

She said, “I was crossing the street walking my dog and was only a footstep away from the path on the other side of the road. I saw a black small hatchback approaching at high speed and I wondered if it was going to turn onto the road I was crossing”.

She continued, “He hit me with the right side of the front of his car. I don’t know how I went flying, but he ended up hitting me on the right, and I ended up in the middle of the road lying on my left side”.

“I got up as quickly as I could and tried to take a picture of the car with my phone. And I screamed at the top of my lungs, but they just drove off”.

Amazingly, she tried to get up to take a photo of the car. Attentions switched to her labrador. Thankfully neither the woman, or the labrador have any permanent injuries.

She said, “I was so worried that he was hurt,” adding, “But, you know the way dogs often like to walk ahead, well thankfully he had, and that meant he was already on the path, which also shows how close to the path I was when I was hit”.

The young woman is hopeful of witnesses:

She is hopeful that somebody living in Taylor Hill Green or living close by may have CCTV footage which could could catch the driver on tape.

A Gardaí spokesperson said, “Gardaí and emergency services attended the scene following reports of a female pedestrian being struck by a vehicle. Enquiries are ongoing.”

They also confirmed they are, “investigating the incident that took place in the Taylor Hill Green area of Balbriggan on 27/12/2020 at approximately 5.53pm“.

More news on the Gardaí here.

Man Dies After Being Shot By Gardaí In Dublin