Home Entertainment This Video Is Proof That Cats Are Not Afraid Of Dogs! 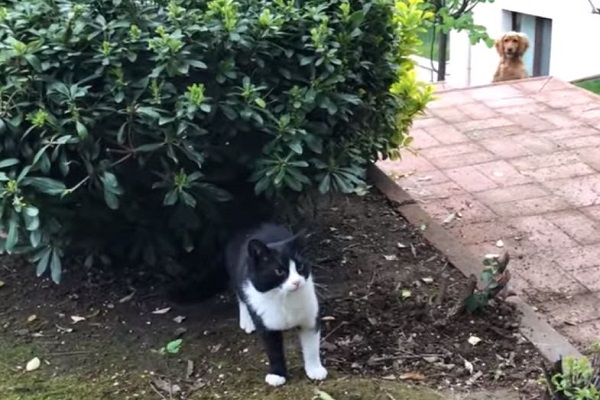 “Always love your neighbour”, a catchphrase that would encourage good community relations between those who live next door to each other.

However, a post from YouTuber Walter Santi would have us believe the very opposite.

Whatever sort of a friendly neighbour Walter is, it’s obvious from the video clip below that the neighbour’s dog is not a welcome guest in the garden!

Like sentinels guarding a fort, the feline occupants keep watch over their patch, in case the canine steps over the line. According to Walter, the “rolling cat” helms the front lines.

If the dog can get past that cat, “D’Artagnan’s girlfriend” is waiting patiently as the second line of defence. What is evident from the YouTube video is a very cute persistent dog attempting to break through the feline fortress.

This pooch is having fun even though he gets the odd angry swipe from a pouncing cat. Yet nothing seems to deter him from making the effort and on occasion, it looks as if he is almost going to make it. Check out the video below!

Apparently, the dog has never managed to get past D’Artagnan’s girlfriend, and if he ever succeeds, he better be prepared to stand down the other 7 outdoor cats that live in the garden. Walter also has a dog, called Walter, and two indoor cats called Santi and Indy.

The three animals along with the battalion of cats outside will probably fight off the intruder to the bitter end, so this poor fella has little hope of getting into the garden anytime soon.

Rare Demo Of The Beatles’ ‘Love Me Do’ Dropped Into Charity...