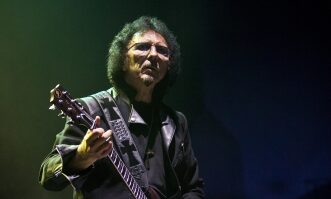 According to guitarist Tony Iommi, Black Sabbath are too busy to record another album.

On the  13th of June 2013 the band released their first album in 18 years. The LP went on to debut at Number One on the Official UK Album Chart to become their first chart-topper in nearly 43 years.

Since then, however, members of Black Sabbath have expressed doubts about whether they will release a follow-up, with Geezer Butler claiming that he didn’t think another new album would have the same “vibe” and could be seen as “a failure” unless it was similarly successful.

“To me, it’s been nicely rounded off now. If we did another album, it just wouldn’t have the same vibe as far as I’m concerned. And with this one doing so well, the next one would have to be Number One everywhere too or people would see it as a failure.”

Writing on his official website, Iommi has said that the band are currently too busy to enter the studio. Discussing their recent experience at the Grammy Awards, where they picked up an award for Best Metal Performance, he wrote: “Well, the dust has settled on the Grammys now. [It was] great to win another one, but what a palaver. As the East Coast is three hours ahead, the televised part begins at 5 p.m. so you’re leaving the hotel at lunchtime, all dolled up and ready for the red carpet! It was good, though.

Iommi expects to finish treatment for cancer in 2014. The guitarist has being undergoing treatment for the lymphoma he was diagnosed with in January 2012.