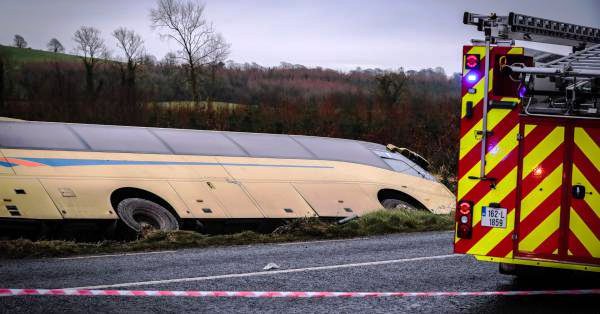 The HSE says seven people were continuing to be assessed after a crash between a school bus and a car in Co. Limerick this morning. The bus was taking 46 secondary students to John The Baptist Community School, when it collided with a vehicle near the village of Caherconlish and ended up in a ditch.

Most of the 32 patients who were taken to University Hospital Limerick have now been discharged. They were treated for soft tissue injuries and a small number of fractures. The crash happened at around 8.30am, when the bus with up to 46 students on board collided with a car on the R513 near the village of Caherconlish.

The students were from John the Baptist Community School in the town of Hospital. The drivers of both vehicles were among the 32 people taken to University Hospital in Limerick. In a statement this afternoon, health officials said all but seven patients have now been discharged. None of the injuries were life threatening.

The injuries sustained mostly consisted of “musculoskeletal and soft tissue injuries”, but also included a small number of fractures. The hospital had set up a dedicated incident group to respond to the crash, but that has now been stood down.

Education Minister Richard Bruton earlier said his thoughts were with the families and the children involved. He added that his department is working with Bus Éireann, and will work to support all authorities involved in responding to the crash. Gardaí and Bus Éireann are examining the circumstances that led to today’s incident.

UL Hospitals Group CEO Prof Colette Cowan said: “This was a distressing incident for everyone involved and I would like to pay tribute to all the emergency services for their effective response in managing it.

“We are proud to work alongside colleagues in the National Ambulance Service, Fire Service, An Garda Siochana, Limerick City and County Council and MidWest Community Healthcare. Our own staff at UHL showed exceptional dedication in managing the situation with many turning up to help without having been called in.”