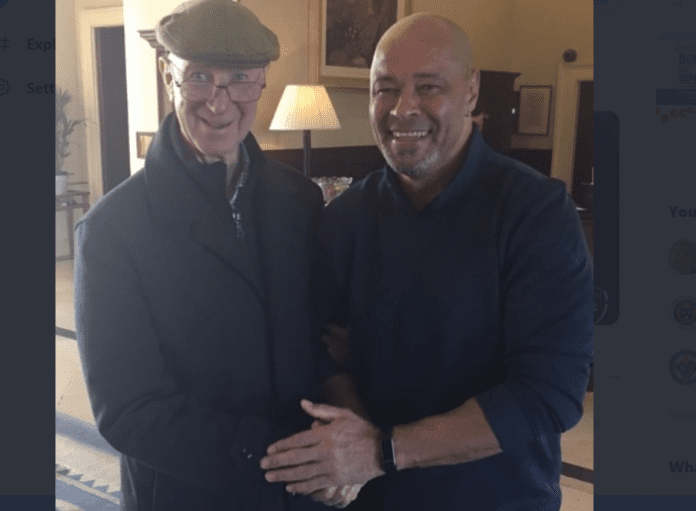 He may have coached hundreds of players, played and been in charge for even more matches as a manager, even won a World Cup! But if there was one player that personified Jack Charlton’s time in football. It was Paul McGrath. Yes ooh aah Paul McGrath!

Jack Charlton enjoyed a hugely successful career as a player at Leeds United spanning two decades. His crowning moment came in 1966 when he won the World Cup with England.

You could make the case that it was Charlton’s exploits as Ireland’s manager that make him more loved by the Irish public, from Ray Houghton putting the ball in the English net, Packie Bonner’s penalty save in Italia’ 90, beating Italy in New Jersey four years later, there’s so many incredible moments!

So many players have contributed to this wonderful part of Irish soccer history. One player who personifies Charlton’s era is certainly Paul McGrath, whom Jack treated like a son.

Despite some off field issues, Charlton’s way of managing Paul McGrath was a father/son relationship.

McGrath’s performances on the field more than repaid Charlton’s faith. His performance against Italy in 1994 comes to mind! Check it out here!

The documentary showed how Charlton struggled with his dementia, how he struggled to identify some of his former players that he managed in Ireland.

However, there was an exception! That was McGrath.

Charlton was watching footage of his time as Ireland manager, when he recognised Paul McGrath.

It was such a touching moment and it did not go unnoticed with viewers, on a night when more than €620,000 was raised in a fundraiser for dementia.

One viewer of this powerful documentary posted online, “The moment in Finding Jack Charlton when Jack sees Paul McGrath on his laptop, says his name and smiles is one of the most heartbreakingly brilliant moments of any documentary I’ve ever seen”.

Another one wrote, “Jack Charlton recognising Paul McGrath on the screen hits you right in the feels”.

Other comments included, “The part of the Jack Charlton documentary when he recognises Paul McGrath is one of the most heartbreaking and heartwarming things I’ve ever seen”.

And, “The moment where Jack is looking at clips and lights up… ‘Paul McGrath.’ Beautiful”.

“Absolutely gutted. Father figure to me for 10 years, thanks for having faith in me. Sleep well Jack, Love ya. Thinking of Pat, John and Peter at this sad time”.

The First Look At House Of Cards’ Final Season Is Here