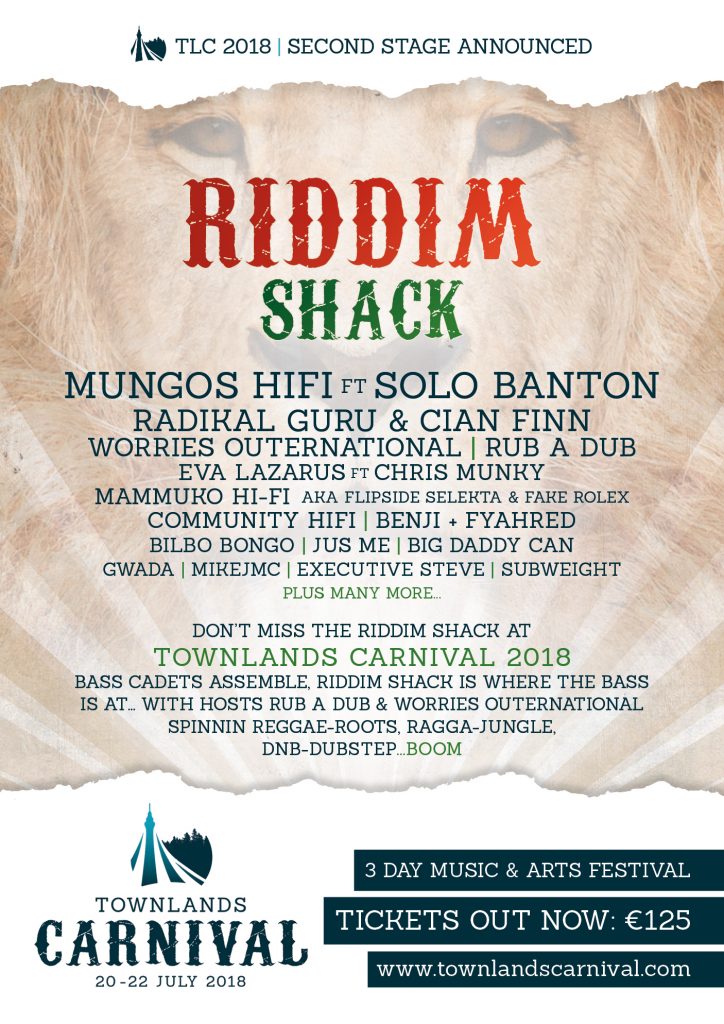 The Riddim Shack is the latest addition to one of this summer’s most visually and sonically diverse festivals, Townlands Carnival. Following headline announcements that include Sister Sledge, Leftfield (DJ set), King Kong Company, Kíla and the new Rising Sons Stage which features some of the best in new Irish music, the Riddim Shack is a welcome addition. Townlands Carnival takes place in Rusheen Farm Estate Macroom Co Cork on July 20nd – 22rd.

Bringing a taste of Notting Hill Carnival and true sound system culture to Ireland, the Riddim Shack is one of the biggest dub, reggae and dancehall stages in Ireland, featuring a mix of eclectic beats, dub and sound system vibes to resonate throughout the weekend.

The Riddim Shack is set to host the great Mungos HiFi alongside Solo Banton. An outfit that ‘assimilates everything from industrialised ska to dubstep, building bruising yet infectiously danceable cyber-rhythms’. Expect heavy dub vibes with catchy dancefloor licks alongside Solo Banton’s endlessly positive lyrics and incredibly catchy style. Radikal Guru & Cian Finn represent the Irish dub scene which is at its strongest yet.

Eva Lazarus also takes to the stage alongside Chris Munky. This collaboration will be one for the books as she’s an unbelievable talent, her vocals ranging from soulful dub to amazing singing and rapping. She is currently one of the great female vocalists of our times, making this is a unique opportunity to catch her in an intimate setting.

Worries Outernational, Rub a Dub, Flipside Selekta & Fake Rolex, Community HiFi, Bilbo Bongo, Jus Me, Big Daddy Can, Gwada Mike, JMc, Executive Steve and Subweight each bring their own taste of Irish DnB, Dubstep and a huge variety of all things bass to the table.

Construction is already underway on a stunning festival site that sets out to wow its audience with ingenuity, colour, daring and imagination. Nestled in the scenic grounds of Rusheen Farm Estate, Townlands Carnival aims to transport the public to quite literally another world!