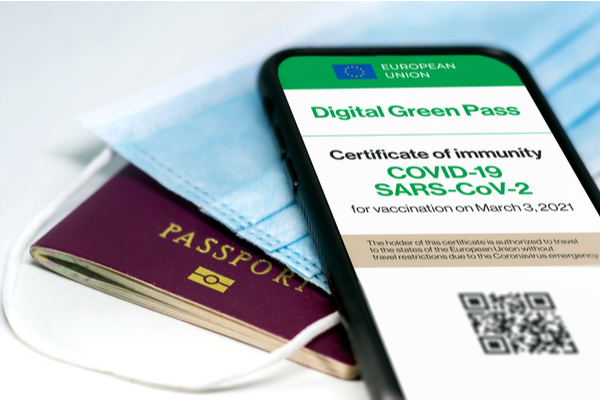 The EU’s proposal for vaccine passports has been passed by the European Parliament, facilitating the resumption of travel across Europe. MEPs voted on the proposal of a Digital Green Certificate yesterday, with results revealed this morning in favour of the cards.

The Digital Green Certificate will be officially implemented on July 1st, before being introduced into Ireland on July 19th. The card will declare if a passenger has been vaccinated, tested negative for COVID-19, or has recovered from the virus.

In a recent interview, Irish Travel Agents Association member, Claire Dunne said the vaccine passport will take away the stigma of travelling abroad during a pandemic.

“And it’ll be OK to talk about holidays; because that’s been a big thing, that people really felt that they couldn’t even talk about going on holiday because it wasn’t the right thing to do. I think people are really looking forward to it, it’ll be great to have the digital passport so they can just make their plans.”

The ITAA member added that it is “really important” that travellers take the available advice, before planning their trip. Ms Dunne explained that they are telling people “to check with their local travel agent”, as it has “never been more important” to do so.

“Things have changed, and they could change again. We’re looking to the future really optimistically, but we know where we’ve come from in the past 18 months. So, we just want to be sure that people know what they’re booking and check the regulations and the rules [and] make sure that they will be able to change”.