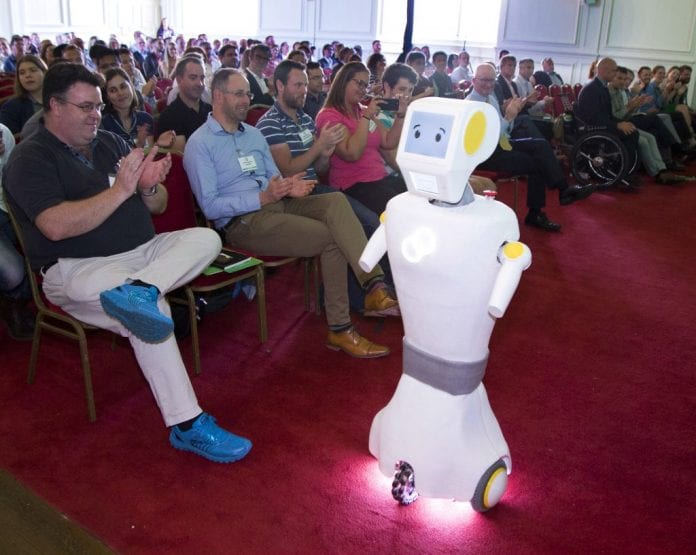 Robotics engineers from Trinity College Dublin have unveiled the first prototype robot designed to work in assisted care facilities and help the elderly and people living with disability in Ireland. The team behind the robot has very recently secured significant development funding from Enterprise Ireland to move the prototype towards a marketable model via a new start-up company.

The friendly looking robot has some human-like features and performs some autonomous tasks and some that are human-controlled. It will initially be charged with performing routine tasks in nursing homes and assisted care facilities.

Assistant Professor in Mechanical and Manufacturing Engineering at Trinity, Conor McGinn, spearheads the Innovation and Robotics Lab. He said: “Nursing homes face significant care challenges, especially during the night when caregiver-to-resident ratios are low. Our solution can perform several routine tasks, which will improve efficiency and substantially alleviate pressure on care staff during periods when the facility may be understaffed.”

The robot has a similar form to a person as it possesses two arms and a ‘head’ interface that allows it to provide social feedback to people working in its vicinity. Sounds, lights, facial expressions, and body language help it to communicate and respond appropriately to different situations.

The robot is mobile and uses cameras, and depth, tactile, inertial and voltage sensors to interact intelligently with its environment, while on-board processors and wireless connectivity (wifi, bluetooth, etc.) diversify its potential uses. In addition to performing functional tasks, the robot can interact socially with residents.

Professor McGinn added:  “The social interaction that is possible with the robot brings many benefits. First, it provides a compelling way to reduce boredom and stimulate mental activity. It can have basic conversations with its users and play a series of simple games, and on a grander level, it can function as a control interface with many different types of technology. For example, through interaction with the robot, residents can control the TV stations, call a loved one, and control lights.”

The Trinity team consulted with a wide range of experts during the robot’s development, including nurses and caregivers, elderly patients living in assisted care facilities.

Professor McGinn added: “The robot is being developed to augment, not replace human care. We have begun working closely with nursing experts and care organisations to develop a solution that empowers both users and care-givers. Through collaboration with organisations like ALONE, we have been able to get a better understanding of the challenges people face as they get older and get valuable user feedback on many aspects of the system.”

The team aims to have the robot market-ready by 2021. Over the next two years, they will be piloting the technology in several care facilities in both Ireland and the US. The first pilot is scheduled to take place in the summer of 2018.

Priest Taken Off Mass After Shocking Homily Before Doubling Down On...