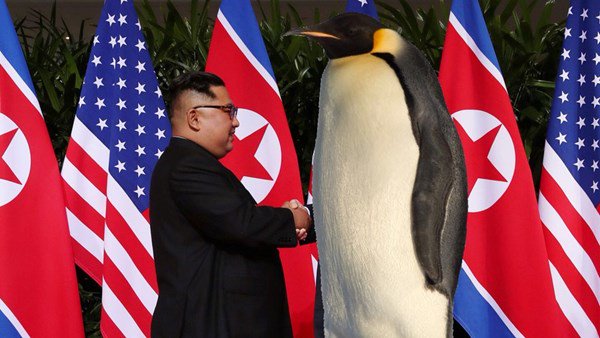 Despite being one of the most powerful people on the planet no one is impervious to the powers of the photo editors of the internet. British satirist Armando Iannucci asked his followers on Twitter to replace images of Donald Trump with a penguin, and the results have catapulted the bird from the Arctic into some very interesting scenarios.

@Aiannucci Sorry I´m late to the party, had to put the kids to bet and learn how to do this! Heres the eclipse #ReplaceTrumpWithAPenguin pic.twitter.com/jjz9h4MiBM

Meanwhile, the infamous Trump Baby is to make an appearance during the US President’s visit to Ireland in November. Trump Baby was the centerpiece of the protests in London during Donald Trump’s visit to the UK in July.

The people organising the protest, the Trump Babysitters, have teamed up with four Irish civil society groups to bring the Trump Baby to Ireland for the protests planned here against Trump and his right-wing politics. The four groups, Afri-Action from Ireland; Comhlámh; Friends of the Earth and the Latin America Solidarity Centre have commented that they are delighted to work with The Trump Babysitter team from the UK.

Kevin Smith, one of the Trump Babysitters in London helping facilitate the Trump Baby’s journey to Ireland commented, “We’re thrilled to be working with groups like Comhlámh and Friends of the Earth to bring the Trump Baby over to Ireland for the protests against the US president’s politics of hate and division.”

Green Party leader Eamon Ryan urged people to “show their disgust and rejection of the Trump administration’s policies… in large-scale mass protest around the country.”

The Best BBQ & Beer Fest Is Coming Back To Dublin