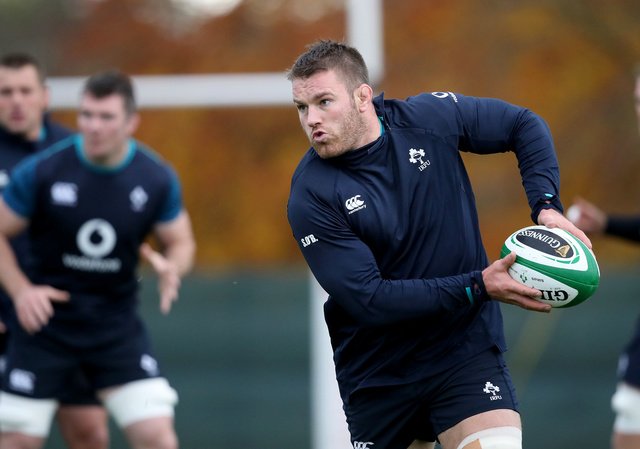 Ireland coach Joe Schmidt has made 12 changes to his side for Saturday’s test with Argentina at the Aviva. Schmidt has handed Sean O’Brien a first international appearance in 12 months after the Leinster flanker made a strong return from injury.

O’Brien, set to win his 52nd cap against the Pumas, has built up his minutes for the eastern province in recent weeks and now looks in prime position to be first-choice for the All Blacks next week.

Jordan Larmour continues at full-back, with Rob Kearney ruled out with a shoulder injury. Jacob Stockdale retains his place on the wing, with Bundee Aki continuing at inside centre and partnered by Robbie Henshaw.

Keith Earls, Jonathan Sexton and Kieran Marmion all come into the backs. And there’s an all-new pack, with captain Rory Best joined in the front row by props Cian Healy and Tadhg Furlong. James Ryan partners Iain Henderson in the second row.

And there’s a 127-caps worth of experience among the back row with Peter O’Mahony, Sean O’Brien and CJ Stander all returning.

Argentina coach Mario Ledesma has made five changes to the side that lost 45-34 to Australia in the final round of the Rugby Championship. There’s a surprise in the team with lock Guido Petti named to start at openside.

Matias Alemanno slots into the second row. Props Santiago Medrano and Santiago Garcia Botta both come into the side.

And in the backs, there are starts for scrum-half Tomas Cubelli and wing Bautista Delguy.

Wasps To Bring Sting As Blues Kick Off Title Defense