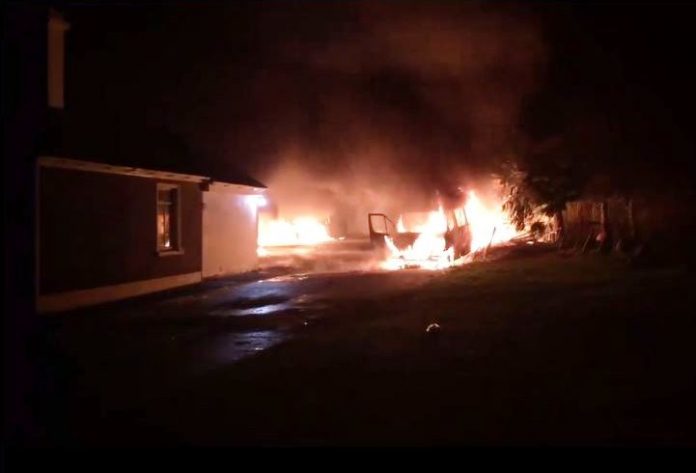 Two men have been arrested in connection with an attack on security guards in Co. Roscommon at the weekend. Eight men were injured as they guarded a repossesed house which had been evicted.

As part of ongoing investigations a number of planned searches have been carried out. During four separate locations, including houses and out-houses were searched.

The attack on the security guards took place in the early hours of Sunday morning outside a house in Falsk near Strokestown.

A number of vehicles were burnt out and a dog was killed following the raid by a group of men.

Gardai have arrested two men in connection with the incident and a number of searches are being carried out as part of the investigation.

A review of private security companies who guard repossesed homes is already taking place. The family at the centre of the eviction say they condemn all forms of violence.

One firearm was recovered and a number of vehicles including a lorry and teleporter were seized.

Two men aged in their 50s and 60s were arrested and are currently detained under Section 30 of the Offences against the State Act,1939 at Castlerea Garda Station.

This morning’s operation follows a number of searches carried out in counties Dublin and Meath on Monday, where members of the Special Detective Unit recovered a number of items including documentation and phones as part of the investigation.

Speaking at Castlerea Garda Station Chief Superintendent Tony Healy said ”We would again like to thank the community for their continued support following recent events in Strokestown and would again appeal to anyone with information to come forward and contact us here at Castlerea Garda Station on 094 9621630 or Garda Confidential Line 1800 666 111.’

Bank Of Ireland Atms Out Of Service Around The Country