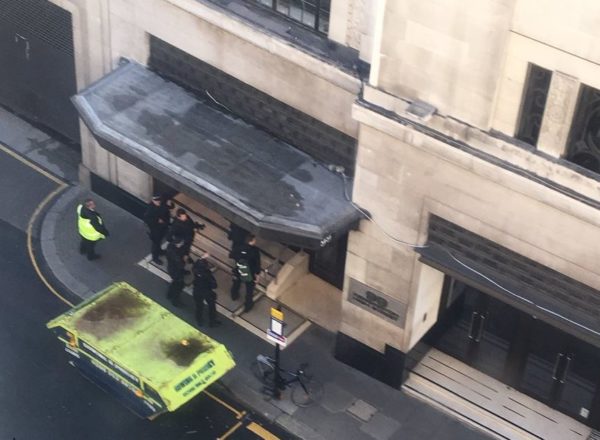 In the Uk, Two men have been apprehended after a stabbing occurred at Sony Music’s HQ in West London. The Metropolitan Police confirmed that two males are currently being treated for non-life threatening wounds.

That’s after they were discovered with stab injuries at the scene in Derry Street, Kensington, London. Both men were caught on suspicion of causing grievous bodily harm and then taken to hospital later on.

For Sony Music, a spokesperson said that the two employees for the company’s catering group got into a “violent altercation”. Metropolitan Police released a statement saying,

“Police were called at approximately 11:00hrs on Friday, 2 November to reports of an incident on Derry Street, W8. Officers, including firearms officers, and the London Ambulance Service attended. Evacuations took place as a precaution.

“Two men [no further details] were found suffering from stab injuries. They were both arrested at the scene on suspicion of causing grievous bodily harm. The men have been taken to hospital where they remain. Their injuries have been deemed non-life threatening. There is no evidence that any firearms were involved in the incident. It is not being treated as terror-related.”

A journalist Simon Neville,  who was at the Sony’s offices during the incident, said to the Press Association,

“Everybody starting pouring out and running towards the square around the back.Then I saw a young, white man with a red jacket being tackled by the security guards by the loading bay on Derry Street. He was shouting at them to get off. Once he was tackled, they started bringing the shutters down. He has now been led away by the police.”