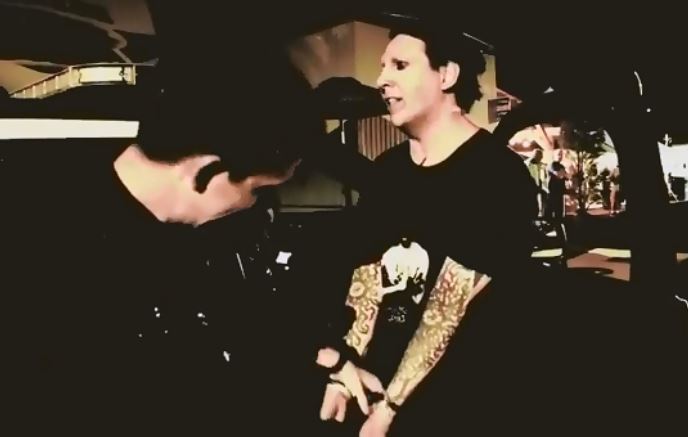 Police in the states have issued an excellent ‘joke’ apology after doom rocker Marilyn Manson shared photos of himself being handcuffed at a festival earlier this week. The dark one aka Brian, was performing at the Impact Music Festival on Sunday 29th of July. At the show he shared a video stating that he ‘doesn’t like drugs’ along with a clip of a policeman handcuffing him backstage.

In response, Bangor Maine Police Department has shared a Facebook post revealing that the whole thing was a joke instigated by Manson himself. The police statement read, “In the interest of saving us a whole lot of call-backs, Marilyn Manson was merely handcuffed and released immediately thereafter. Officer Curtis Grenier, typically listening to only Enya, and a little bit of Oasis, was posted backstage during the Impact Music Festival. He did not recognize Mr. Manson without his stage makeup- our apologies.

“Later, when approaching Rob Zombie, Officer Grenier was overheard saying, “I have never seen him in the Walking Dead, so I don’t know what the big deal is. Grenier has been spoken to and relieved of back-stage concert related duties for the foreseeable future. The Chief has determined that Grenier can work backstage during Lord of the Dance or anything related to Disney.

Keep your hands to yourself, leave other people’s things alone, and be kind to one another. We will be here. With the Beautiful People”. Manson has now resumed the ‘Twins Of Evil Tour’ with Rob Zombie after calling off a show due to an unforeseen sickness last week.

“Sex Pistols Killed Punk Before It Could Become Mainstream” – Armstrong