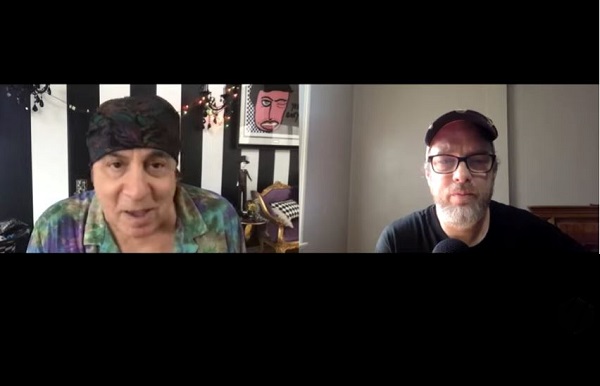 American singer/songwriter, Bruce Springsteen hit the heights of fame with the E Street Band, receiving applause from around the world. A far cry from the prestige of Springsteen’s memorial day gig, Steven Van Zandt recalls one performance at the Uptown Theatre in ‘75 which gained the band a reputation for all the wrong reasons.

Seven songs into their set, Springsteen and members of the E Street Band were forced to leave the stage because of a bomb threat. Following a performance of Thunder Road, fans had to be cleared out from the venue and sweet talker Bruce assured fans that they would all come back together to finish the concert. Leaving Bruce and the band with a lot of spare time, E Street’s Steven Van Zandt recalls an idea quickly hatching.

According to Van Zandt, Bruce and the gang got “hammered” in the hotel bar, before eventually making their way back to the venue.

“We were really drunk, and we very rarely went onstage drunk,” Van Zandt explains. “Bruce was really drunk and almost killed himself climbing out of the car on the way back to the gig. I was holding onto him with both hands with all of my might. He was literally trying to climb on the roof of the car that was going about 75 miles an hour.”

Van Zandt recalls the band immediately reverting “back to our bar-band days” upon returning to the stage to finish their show. The free-spirited group kicked off the party with a cover of Chuck Berry’s Little Queenie, before covering the Shirelles’ Baby It’s You, and missing in a bit of the Shaft theme tune during Rosalita.

As the band dug into the opening notes of Little Queenie, Bruce shouted to the crowd, “I don’t know what you did, but we got real weird!” The Boss then told the band to “bring it down” a little and took time to expand on the evening’s events. You can hear Van Zandt cover the rest of this story in the video below.

Springsteen and the E Street Band played an absolute cracker at their first visit to Milwaukee, with the evening still holding a special place for Van Zandt. He recalls the gig as “being the greatest show we ever did. Now, that may have been just my drunken feeling at the time.”

You can catch more of Van Zandt and his stories as he shares plenty of them in his new memoirs, Unrequited Infatuations. A number of special events will celebrate the arrival of the new book, including a very special livestream  one on September 28th, where Van Zandt will be interviewed by The Boss himself.

Fleetwood Mac Are Back Touring Without Lindsey Buckingham